ARC Review: Nobody But Us 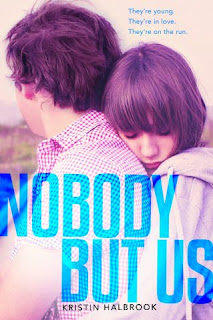 Nobody But Us by Kristin Halbrook
4/5 stars
HarperTeen, 2013
272 pages
YA Contemporary
Scheduled for release January 29

I've followed YA Highway for a pretty long time and have been eagerly awaiting the debut of Kristin Halbrook after discovering it was a contemporary and in a story parallel to that of Bonnie and Clyde. Although I don't find bank robbers romantic, I do find something very compelling about young people on the run from the law, which is exactly what happens for our young couple, Will and Zoe.

Will just turned 18 and is thus being kicked out of foster care. Although they've only known each for for a few months, his biggest concern is Zoe, only 15, who lives with an abusive father whose bruises have failed to arouse the outrage of her community as she seems to blend into the background. But they think their love is something precious and so they hatch a plan to run away to Vegas and make a new life, collecting crimes along the way.

One of the big pluses I have for this book is the distinct narrative voices. It alternates between Zoe and Will and each chapter is very clearly that person. Will is rough and tough, unpolished and incorporating slang like "ain't" into his words. He has a lot of anger against the world. Meanwhile Zoe is younger and more naive about the ways of the world as well as possessing the vocabulary of someone better educated.

Another plus would be the addictive writing. This was a very fast-moving story and I could barely put the book down, so eager was I to find out what happened next. A related bonus is that the chapters are pretty short. It is always very easy to convince myself to read "just one more" (and then one more...and then one more...until the end) when that is the case.

The book starts out on a rush as they escape Zoe's father and continues apace as we flash back to incidents in their lives that have shaped their personalities. The further they get on their journey, the more hot water they're in and the more the horrifying conclusion draws near. I really grew attached to both characters especially because my protective side kicked in and I wanted to mother both and get them into therapy to begin the healing process. I found the ending very heartbreaking and eagerly look forward to the next Halbrook book.

Other Opinions:
Blkosiner Book Blog: "Fast paced contemporary that will break your heart."
The Book Scoop: "A solid read that I couldn't read fast enough."
Chick Loves Lit: did not love this
The YA Kitten: warns that this glorifies an unhealthy relationship