ARC Review: What We Saw At Night 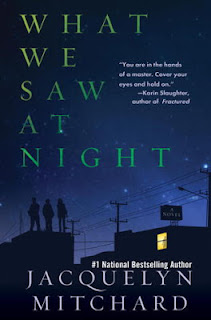 What We Saw At Night by Jacquelyn Mitchard
4/5 stars
Soho Teen, 2013
243 pages
YA Mystery Thriller
Scheduled for release January 8

I originally requested this book under the impression that it was some kind of science-fiction novel with aliens invading the world and these three kids who are awake at night being the only ones who know what is going on. Now while I happen to think that is kind of a cool premise, it's not even close to what is actually happening in the book.

Yes, there are three teens who spend their awake time at night when almost everyone else is asleep. That is because they have Xeroderma Pigmentosum (XP), a fatal allergy to sunlight. To occupy their time and to compensate for the fact that XP-ers often die young, they embark on learning Parkour, something I learned about via Jake Gyllenhaal in "Prince of Persia: The Sands of Time" so I was glad to have those images to fall back on (I also believe there are many videos on youtube if you're interested).  The discipline can be dangerous but what actually ends up being most dangerous is what main character Allie sees at night. That is she thinks she sees two murders but when even her two best friends don't support her, she starts to have doubts.

This is the moment when the story really shifts as Allie tries to find out more while friends Juliet and Rob pull away. Then we discover that Juliet knows way more than she's shared and other plot threads start coming out, such as the small-townness of where they live and Allie's budding interest in criminal justice and serial killers. The latter part of the book also brought out more of Juliet's characterization and I saw a bit of Julie from Code Name Verity in her (an extremely positive comparison). Rob didn't make much of an impression despite being Allie's love interest but the girls' friendship really tugged on my heartstrings.

I've read some reviews that didn't like the writing style. It is written in first-person past tense with occasional interjections from present-day Allie. This reminded me of Gabrielle Zevin's Birthright trilogy and I read comfortably. But I know it's not for everyone so I just wanted to warn you.

The ending was abrupt and is what caused me to add thriller to my genre categorizations above. There is no clear-cut resolution and everything is set up for a second book, a sample of which was available in the e-ARC I read. I enjoyed the writing and plot enough that I will definitely want to check out the sequel.

Other Opinions:
YA Between the Lines
ReaderAlex
Library Lady