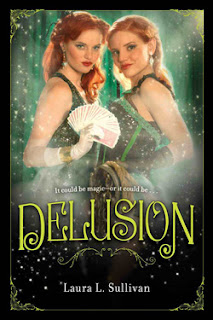 I loved the idea of magicians and magic interwoven into a plot set during the beginning of WWII so that was what initially grabbed my interest, in addition to the mention of sisters, my story weakness. I also love the green on the cover as well as the font.  However I perused some reviews before starting the book and ran across one from The YA Kitten, linked to below, that gave me pause. Knowing what was coming (and knowing that I would not like it) made me disinclined to finish the book although I did manage to drag myself through to the end.

But let's go back to the beginning. Phil and Fee are daughters of magicians and set to make their big stage debut with a trick of their own design and implementation. As they perform though, Nazi bombs are dropped over London, killing and destroying. Their parents and older brother volunteer for special missions to aid Britain but the twins, at only seventeen, are sent off to the countryside to be kept safe. Phil is outraged and immediately sets about trying to prepare everyone their for a pending Nazi invasion though they seem strangely unaware of the situation while Fee is dreamy-eyed and hopeful of meeting a young man to be her partner in a Jane Austen story. Boy, are both girls in for a surprise when the stumble across a magician's college! Phil meets Arden, who tries to kill her on first meeting for her nosiness while Fee meets Thomas, the fulfillment of all her romantic hopes and dreams. As Phil tries to galvanize the school into action, they also face a threat from German magicians who take the racial superiority rhetoric of Hitler further and believe magic folk above all commoners who they would like to subjugate.

In some ways this book reminded me of Cold Comfort Farm with the stranger coming in and trying to reorganize the sleepy small town for the better (or so she thinks). I thought there were some great passages and lots of comedic moments as well as some good inner conflicts for the characters. However it did seem to drag on despite the fact that one would think war would be a great driving force for action. I was a little confused about how much time had passed at certain points. Phil and Arden have a hate to love relationship, complicated by many factors but knowing what was to come for them, I had a lot of trouble supporting the relationship.

But the biggest problem is also one that has bothered other people and is very much a SPOILER so now you are forewarned. Phil (and Fee) have immunity to the magic practiced by Arden and his lot. Although he offers restoring the magic to her, she considers and refuses. Toward the end, as we approach the climax though, Arden decides to force the magic into her, hoping it will keep her safely away from the conflict. Yes, he radically changes her life without her consent and despite her very clear "no." This force causes her to pass out and when she awakens, she accidentally causes mass destruction and death to her guilt. However she is not sufficiently angry with Arden although I, and others, are more than pissed on her behalf.

Overall: Despite an intriguing premise and some great scenes, this ending leaves me very displeased.

Other Opinions:
The YA Kitten: Ashleigh's review is the one that forewarned me what was coming.
Wandering Librarians: Arianna also commented on the problematic ending.