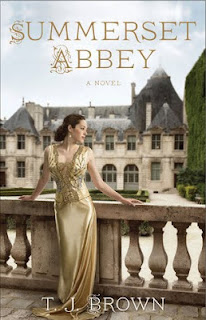 Although technically an adult book, I think YA bloggers may be interested in it, appreciating that it is a clean read.  That plus the fact that I'm a sucker for historical fiction, especially those whose summary hints at parallels to "Downton Abbey," which I felt this book's did, were the main reasons I wanted to read this. I also love the presence of a sisters relationship, a theme for which I have a soft spot. Additionally I loved the cover with its pretty dress. So I entered this book with high expectations. But being kind of a weirdo, I had a mixed experience.

There are three main characters: Rowena, Victoria, and Prudence. Although Prudence is the daughter of the first two girls' governess, she has been included as part of the family by the father. After his untimely death though, the two daughters are warmly welcomed into their ancestral home at Summerset Abbey while Prudence is relegated to the role of lady's maid. Both of the daughters are upset that Prudence is being separated but Rowena mostly passively accepts the distinction while the delicate Victoria rages against the slight. Thereby Victoria and Prudence are established as the more sympathetic characters with Rowena frequently shown as incapable and mostly unwilling of doing anything to change their circumstances.

As the establishing book in the series, I felt like a lot of plot threads were introduced but none were really dealt with. Rowena develops an interest in flight as well as in a neighbor boy while Victoria toils to learn typing in addition to juggling her own flirtation. Prudence's story moves the most as she learns a shocking family secret and entertains two gentlemen friends (okay, it doesn't go that far but she has two men express interest in her). There are also cousins of similar age who are bristling against the constraints of Edwardian tradition (just wait for the Great War boys!) But I found them all so boring.

Honestly my favorite character was Lady Summerset (aunt to Rowena and Victoria) with her iron will. However I don't think you were supposed to like her as she schemes against Prudence, planning to put her in her place. Since I didn't care for Prudence but I like strong characters, Lady Summerset was awesome.  The three main characters suffer as women in a man's world but Lady Summerset suffered in her own way. She carefully manages her household and would certainly be a force to be reckoned with if she was allowed into politics or business; instead she observes and she arranges through her husband as best she can. I wanted more of her (I guess she kind of reminded me of Lady Violet in Downton Abbey :)

Because I found the three leads so dull, I struggled with this book. Still if reviews suggest that the second book picks up steam (perhaps the urgency of war will illuminate it? Not sure if we'll be at the brink of war yet), I would be interested in continuing.