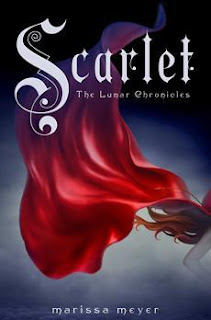 Unlike many bloggers, I didn't love the first book in this series Cinder and I think that was because I was expecting more of a Cinderella retelling, whereas Cinder seemed more intent on developing its own much more expansive world with the huge threat of the Lunar people. Consequently I was disappointed and approached Scarlet somewhat apprehensively. I was also nervous because it was incorporating the tale of Little Red Riding Hood and I've never had any interest in reading a retelling of that.

Yet when my copy came in the mail, I picked it up just a few days later and dove in, emerging breathlessly when I realized I needed to get some sleep. Then I finished it off the next morning. In short, this book was fantastic!

First we meet new characters Scarlet and Wolf, who bear a resemblance to the characters from the fairy tale but who get their own awesome spins. Scarlet is a pilot who works on her grandmother's farm, a grandmother who has been missing for two weeks, leading Scarlet on a quest to find her, aided by the Wolf, a street fighter who manages to earn her trust despite her hesitations. With a name like Scarlet, I expect a certain amount of spunk and I got that from her. She has words and bravado aplenty no matter what awful situation she gets herself into. Wolf has been a very popular figure in the blogosphere; he's not quite to my taste but I can see the appeal with this big tough guy and yet his vulnerability.

Soon we receive a parallel look at Cinder who is breaking out of prison, accompanied by Carswell Thorne (who Jen Ryland originally freaked me out about before calming me down-I love Cinder and Kai, thank you very much!) and set on learning more about her heritage. Cinder is shaken to be so chased but she remains kick-butt and determined to learn about her past instead of running away and curling up in a ball (I would not be able to blame her if she wanted to). Thorne is a more devil-may-care character, extremely charming, drawing comparisons to Han Solo. He's quick with a quip but I didn't really feel that I know him-perhaps he will have a more prominent role in book 3 rescuing Rapunzel from her tower of thorns? (See Heidi for this theory as pointed out to me via Jen Ryland)

Meanwhile back in New Beijing, Emperor Kai struggles with his complicated feelings about Cinder and fends off the intrusions of Lunar Queen, Levana, who continues to be as evil, all-knowing, and powerful as she was in the first book. She is absolutely ruthless and terrifying despite only appearing in a few scenes.

After reading the synopsis for Scarlet, I had been wondering how Scarlet would fit in with Cinder's story. I originally thought it would just be a companion novel set during the same time period. Instead it is more of a sequel, picking up as it does after the events of Cinder, but introducing loads of amazing new characters, settings, and plot points without overwhelming what we already know from Cinder and continuing to deepen our experience with her. Cinder is still very much the main character of the Lunar Chronicles. I thought every element was very well-balanced (except for my one criticism below) and that this was an excellent second book.

A scene I particularly want to shout out is the scene that pays homage to the original fairy tale of Red meeting her grandmother. I don't really have the words to describe how perfect I found this scene but it caught me completely by surprise and made me put the book down just to savor the exquisiteness.

Despite my praise, I didn't give this book a perfect 5/5 stars for two reasons. First I personally wanted a bit more Kai-I still think he's a fantastic guy. He's honorable and devoted to service, just the kind of upstanding hero I like. But he doesn't get to do anything fun and ends the book with an extremely painful decision. The situation is going to get worse before it gets better as we still have two books to make it through. And I also wanted to leave room for the next books Cress and Winter. If they are anything like this, I will be very pleased to award a perfect 5 stars rating. I am a little worried that there will be too many characters but am willing to give the benefit of the doubt.

Cover: While I love this book, I am less enthusiastic about the cover. I preferred the shoe on the cover of Cinder.

Other Opinions:
Good Books and Good Wine
Great Imaginations
Into the Hall of Books
Jen Ryland/YA Romantics
So Many Books, So Little Time
YA Book Queen