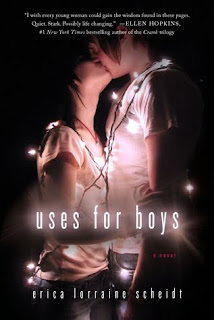 Before starting this book, I read one mostly positive and one negative review, linked to below, which left me very nervous especially because both emphasized that the contents of the story were far darker than what the cover suggests. I thought the book would feature a young promiscuous woman struggling to fill gaps in her life with boys but eventually coming to a greater revelation about life. I did not feel like that happened and I will have to agree with the negative side. I like books that are uplifting, ending on a positive note with the main character out of the dire circumstances that characterized most of the book and I didn't feel like this book entirely achieved that.

The book starts when Anna is young and it's just her and her mother and that's all it needs to be. But her mother disagrees and a string of stepfathers and boyfriends parade through their life as Anna is increasingly left alone by her mother. So she turns to boys, earning a reputation before meeting her best friend Toy who seems to attract boys in a much deeper way than Anna. Then Anna meets Sam who seems like the perfect boy with the perfect family Anna always wanted; can she hold on to them?

I'll admit that I never really felt connected to Anna. See I'm more of a Sam with pretty much the perfect family (and I'm not just saying that because my mom reads my blog ;) Even though our circumstances are vastly different, I still anticipated being able to feel something for Anna but it never really happened. Not even during an event that I would imagine generated a lot of emotions but was played off very coolly. Whenever I have trouble connecting with the main character, I struggle with the book

Additionally there are an awful lot of sexual acts in this book-because of that, it might even be more like New Adult than Young Adult especially since Anna drops out of school to work and make her own way in the world. I prefer more chaste stories in my young adult books. Saying that, even those scenes were narrated pretty dispassionately in my opinion, furthering the distance between reader and Anna.

Warning: Sexual content as well as drug use; I would definitely recommend this only for the mature teen and adults.

Other Opinions:
Blkosiner's Book Blog-first warned me that the contents were darker than the cover suggests
Great Imaginations-did not connect with this book at all