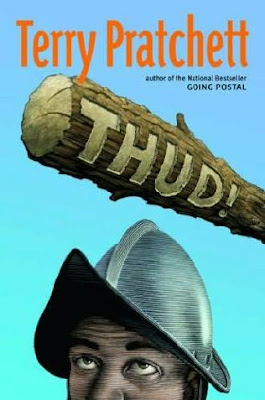 Harper Collins, 2005
373 pages
Fantasy; Discworld
4/5 stars
Source: Bought at a book signing about five years ago so this is autographed!
Summary: Sam Vimes is the Commander of the Watch is seeing increasing tensions in the city of Ankh-Morpork between the trolls and the dwarves before the pending anniversary of the Koom Valley battle. A lot of other stuff happens in typical Discworld fashion.
Thoughts: It took me FOREVER to read this; I've had it since it came out; one of my friends told me it was her favorite three years ago but still I didn't read it until I started my personal read my own books challenge.
I wish that I had read more of the Discworld novels before I started this one as there were references to many previous books. Of course that just provides more encouragement for me to go back to all of them, sooner rather than later.
I liked Sam Vimes: He's a devoted family man, fiercely protective of his city, and has a sensible attitude toward bacon (as in more is better). Then there were the trolls and the dwarves.
I definitely need to read some of the other Watch novels especially if any feature Sam's courtship of his wife Sybil or the birth of their son. It looks like I should read Guards! Guards and Men at Arms; I will try to do so later this year. I also want to read more about Lord Vetinari-does he have any books devoted to him? But DEATH is still my favorite character and he makes a brief appearance here.
Overall: This should not be your introduction to Pratchett's writing or Discworld but if you've read some of the others, it's a fine addition to the oeuvre.
Cover: It's not my favorite; the club is representing the trolls and apparently Thud is also a game so...meh.
Read for Terry Pratchett Challenge
Posted by The Insouciant Sophisticate at 12:01 AM