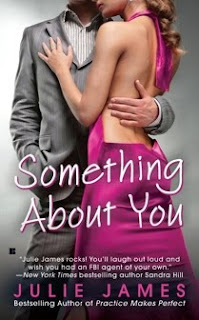 Something About You by Julie James
Berkley Sensation, 2010
307 pages
Contemporary; Romance
4/5 stars

Source: Picked up cheap at a thrift store

Summary: Assistant US Attorney Cameron Lynde is trying to relax in a hotel room when she hears the couple next door going at it; later she catches a glimpse of a man, who murdered the woman within.  The FBI agent who comes to the case is Jack Pallas, a man with a grudge against Cameron.  But they have to push their personal feelings aside in order to nab the killer...or do they?

Thoughts: I saw some reviews of this on other blogs and they were largely positive so I was excited.  A large part of the story is how they each are (pretty rightfully) angry with the other.  She is angry because he insulted her in vulgar terms on TV after she refused to prosecute a case that he spent two years undercover working on.  He is mad because he thinks she had him transferred from Chicago to Nebraska in retaliation.  These are legitimate reasons unlike some romantic misunderstandings.

He sounds very hot although his name is uncomfortably close to that famewhore bachelor Jake P (I'm pretty sure his last name starts with a P).  He is also very brave as he was tortured for two days by a crime lord's gang without giving anything up.  He is dedicated to his job and he is good at it.  She is similarly devoted to law and justice and has experienced tremondous growth since their last encounter. I kept picturing her as Gabrielle Anwar (Fi on "Burn Notice," see Cover, although she doesn't seem to have a fondness for C-4).  Together they are a very hot couple.  One thing I really liked was that they hashed out their problems with each other before sleeping together-sometimes it seems as if couples sleep while still having mistrust.

Additionally the other characters are good.  I loved Cameron's friends Collin and Amy although Amy isn't well-defined.  I liked the other cops and special agents who are looking out for Cameron.  The villain was certainly scary in his determination to do wrong but he wasn't absolutely terrifying like some of the best villains in literature are.

Then there is the thriller aspect.  We find out pretty early on who committed the murder and that the person would like to silence Cameron but the two don't figure it out until much later.  The final showdown scene made me think of Red Eye as her beautiful house is somewhat destroyed although spoiler-Jake and Cameron survive ;-)

I'm still not a big fan of contemporary romances but this was good.

Warning: Can't say that I liked their use of the f-word-a bit too prolific for my tastes.

Overall: Sparkling good fun-charming protagonists and a thriller to boot!

Cover: Reminds me of Michael and Fi on Burn Notice, which is a very good thing!
Posted by The Insouciant Sophisticate at 12:01 AM