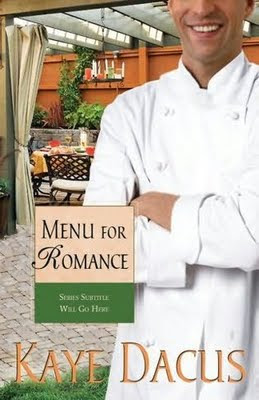 Menu For Romance by Kaye Dacus

Barbour Publishing, Inc, 2009
317 pages
Contemporary, Inspirational, Romance
2nd in Brides of Bonneterre Series
3/5 stars
My review of the first book, Stand-In Groom, which I loved.
Source: Received from netgalley.
Summary: Meredith and Major are busy professionals at her family's company and they've had crushes on each other for years. But neither has ever dared to say anything. This year will be different. Meredith has made a New Year's resolution that she will find a relationship. And while Major doesn't want to saddle any woman with his mother's schizophrenia, he doesn't want to lose Meredith.
Thoughts: I didn't like this book as much as the first one because Meredith and Major are both in love with each other but are too afraid of getting involved because they don't think they're good enough. Plus Major keeps his mother and her mental problems hidden because while he "loves" Meredith, he thinks she would reject him if she knew. That doesn't indicate trust or respect or love to me.

Additionally Major at one point wants her to admit that she loves him even though he doesn't plan to act on it or anything!  I mean on the one hand, he's very old-fashioned chivalrous (sometimes it veers in to patronizing for me) and on the other hand he doesn't trust her at all which does not indicate a strong future for them.  Basically he wants her around for him even though he's not going to do anything about it.  I hate heroes like that!  They don't even deserve the label "hero" in my opinion.  When she finds out, he purposely misunderstands her good heart.  He is a disgusting coward who's ashamed of his mother and is a pathetic excuse for a man.  Eventually they have it all out but it was somewhat unsatisfying.  I don't see them having the future Anne and George will have and I don't really want to hear about them in the next book.

Also the whole John Wayne obsession thing was so played out.  First John Wayne was a right-wing racist nutcase, not someone I want to support.  Second it seemed like his publicist had arranged for all this extra publicity (obviously that's crazy because he's dead but it felt like that).  I was super pissed every time they talked about him.  The Dean Martin craze (and seriously who likes Dean more than Frank?!) in the first book was much less obtrusive.

Heroine: 4.5/5 (Strong, hard-worker, a bit of a mouse when it comes to her family; obviously bad taste in men)
Hero: 1/5 (for his cooking abilities; nothing to do with his interactions with the heroine.)


Overall: Less satisfying romance than the first book but I still love most of the people in Bonneterre.
Cover: Again it has the chopped off head but the fact that Major is a chef and that makes me think of cooking shows which I adore means that I prefer this cover to the first book's cover.
Posted by The Insouciant Sophisticate at 12:01 AM