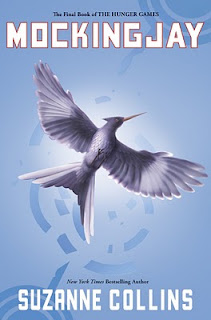 Here are my reviews of The Hunger Games and Catching Fire.

Source: Bought (stupid amazon delivered it a day late causing me to spend all of August 24th pouting)

SPOILERS of first two books in summary. Minor spoilers in thoughts (generalities, no specifics; ex. I would say there were a lot of deaths in HP7 but I wouldn't write their names).

Summary: The highly anticipated conclusion to Suzanne Collins's Hunger Games trilogy.  Katniss has twice survived the Hunger Games and is now in the hidden District 13 where she must decide if she'll be the mockingjay, the figurehead of revolution against the Capitol.  More violent than its predecessors (yes, seriously!), this book will put you through the wringer.

Thoughts: Well, Collins is definitely in the Rowling camp when it comes to who and how many of your favorite characters will die (in comparison to the Meyer camp where it is my understanding that nobody had to sacrifice anything and it was very anticlimactic; note: I haven't read it because I don't hate myself but that's what I've heard).  The consequence is that the characters who do survive along with the reader end up emotionally devastated (well, at least I did).  I didn't cry because I was speeding through but when I reread it, I think I will.

It is also very violent because there's a full on revolution/war going on.  Inevitably there are survivors and there are the dead.  And of course those who die are either already beloved characters or have enough of a presence that we miss them.  There are also some secrets about the early days of Panem revealed and very few authority figures we can trust.  The other books were pushing the YA label but I would definitely say this is older YA if not basically an adult book.

Teams: Now I'm not going to say if she picks anyone but the reason I'm listing for being on each team is the justification for why she chooses that option. (Listed alphabetically)

Gale: He taught her how to hunt and has encouraged her independence; additionally they are both fiercely protective of their families.
Katniss: So kickass, it's not like she needs a guy and she will continue to be awesome; or she's dead.
Peeta: He balances her out and brings out new aspects of her character; additionally he loves her even when she feels unloveable.

Note: I remain Team Peeta, even if the odds aren't in his favor.

Overall: I enjoyed it less than the previous books and I'll definitely need to reread it (unfortunately I lent it to a friend so I don't have it right now.  I know, I didn't have to do that but that's what makes me so nice. *WICKED!*)

Cover: I think a darker blue would look nicer on shelves next to the red and black of the first two.
Posted by The Insouciant Sophisticate at 12:01 AM