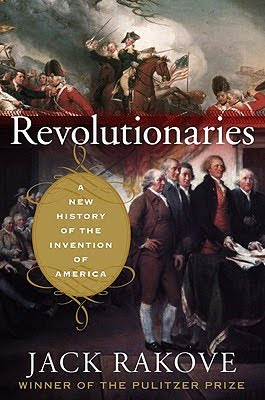 Houghton Mifflin Harcourt, 2010
442 pages
History, US
4.5/5 stars
Source: Received for review through Netgalley
Summary: Covering approximately 1773 to 1792, this book aims to reveal the Founding Fathers as never before seen. They were private citizens who appeared on the public scene as leaders and thinkers as they shaped what would become the United States of America.
Thoughts: I had trouble getting in to this book, partly because it is an ebook and my preference is still for hard copies. Regardless, this week I started buckling down and reading a goodly number of pages a day. I also recently watched "1776" and I loved some of Franklin's lines including one where he says that future people will recognize that the Founding Fathers weren't demigods, but were merely human. Rakove follows that approach, situating them in their time and explaining their very real worries and their different backgrounds and how that lead to what happened.
I clearly have not read enough about the Revolutionary War because I was largely unfamiliar with the leaders who fought (except of course for Washington) and I was embarrassed that I didn't recognize most of the names involved. There were the familiar conflicts but new faces for me to meet and learn about.
Henry Laurens and his eldest son Jack were in chapter 5 and they were completely new to me. Henry earned his money through the slave trade and then invested in land and more slaves making himself very wealthy but Jack was supportive of the antislavery movement. Henry evolved in to also supporting it but Jack was even further. Note that is not the abolition movement nor did it encourage enfranchisement's of slaves necessarily but it was a big step ahead of most people, especially of those who benefited from slavery so much.
I really enjoyed the mix of public and private life showed here although I was disappointed in several aspects. Martha Jefferson is probably the most-mentioned female and she dies during it! Abigail Adams is rather neglected in my view and Martha Washington isn't much mentioned either. The Articles of Confederation also could have had more explanation-even now I'm not sure how they were written and agreed upon although the process of developing the Constitution is well-covered.
My text didn't have any footnotes, using a format whereby certain quotes appear in the back under the Notes section and that links to the source. It is not my preferred method and while I can accept it in non-fiction in general, I don't think it is the best method for history books.
Overall: Great writing and I think it's a fascinating period.
Cover: I love this cover-it has fighting and writing, showing the different sides of the revolutionaries.
Posted by The Insouciant Sophisticate at 12:01 AM