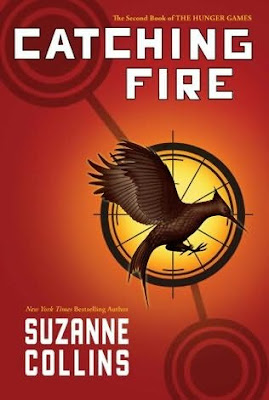 Scholastic, 2009
391 pages
Dystopian; YA
Second in series
5/5 stars
My review of The Hunger Games can be found here.
Source: Bought by my parents so I didn't have to violate my book ban.
Warning: Spoilers!
Summary: Katniss has managed to survive the Hunger Games but while outwardly things look much the same, around the country, the districts are in turmoil. Her relationships are also fractured: her feelings toward Gale and Peeta are confusing and she's confused about her place between the Capitol and rebellion. When Katniss is called back to the arena, the stage is set for an uprising.
Thoughts: It was really easy to jump back in to Katniss's world, probably because I just finished The Hunger Games. It was pretty slow at the beginning as Katniss tries to sort things out: how she feels about Gale and Peeta; how she feels about rebellion; what she's going to do. Then she gets word that she's going back to the arena to serve as another tribute. It really picked up after going in to the arena-I sped through it! Trying to figure out what the Gamekeepers might have dreamed up to torture the tributes and then clutching at my chest as she scrambled to get out-it was very intense!
Team: I still like Peeta even if she wants to stupidly remain in love with like the first guy she ever met. Peeta bakes! And he sounds adorable! Whereas Gale hunts and he sounds kind of ugly.
Overall: Even more gripping than the first book, Catching Fire ends with a bang to send us right in to Mockingjay!
Cover: I like the black of the first book more but this fits with the series.
Posted by The Insouciant Sophisticate at 12:01 AM