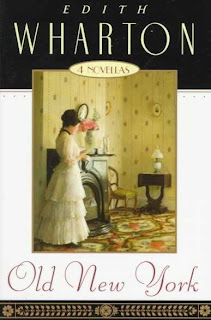 I was browsing in the library and came across Old New York by Edith Wharton, a collection of four novellas. I've read Ethan Frome, which is very different from other Wharton works as it's set in a rural area in New England while most of the others are in New York society like this one.

Summary from back cover: "These tales are vintage Wharton, dealing boldly with such themes as infidelity, illegitimacy, jealousy, the class system, and the condition of women in society."

False Dawn: A young man is sent on a tour of Europe to collect art to bolster his family's reputation; when he returns his father disowns him for choosing poorly. However many years later it turns out to be a very valuable collection. I liked that the man's wife stood by him even through their years of poverty-I only wish his judgment could have been redeemed in his lifetime.

The Old Maid: This is also a Bette Davis movie; although I have not seen it, I enjoyed trying to picture her in this role. Possibly my favorite due to that. It's an especially heartbreaking story as a mother watches her daughter scorn her in favor of the adoptive mother, her cousin. I can't imagine having to watch your child everyday call someone else Mother and treat you as a poor spinster relative.

The Spark: This was my other favorite as the main character Hayley Delane is an interesting man. He ran away from school to enlist in the Civil War despite being underage and wealthy enough to buy his way out. Later he takes in his scandalous father-in-law as there is no one else to care for him. And it turns out that he is inspired by his meeting Walt Whitman during the war although he doesn't care for his poetry at all. I shared in the narrator's fascination with Delane and looked forward to finding out more about him as the story progressed.

New Year's Day: I really liked the twist in this one. A woman engages in an adulterous affair in order to scrounge up enough money to provide for her dying husband-everyone thought she was just a cheater but she didn't care because she kept her husband comfortable. She spends the rest of her life alone and comfortable in the knowledge that she did her best for her husband. It was a sweet love story although since the husband died in the beginning also tragic.

Overall: 4 out of 5. Actually all of these stories were to varying degrees depressing showing limitations placed on women and families by society. Despite that, they were enjoyable and readable. I was already planning on reading The Age of Innocence but now I am even more interested. The backcover also described the last story as O. Henryesque which makes me want to read some of his work now too.

I realize this wasn't so much a review as a description of the parts I liked but it is really good. I would recommend it as a nice bedtime reading or to someone who really likes Edith Wharton and has read her major works already.
Posted by The Insouciant Sophisticate at 12:07 AM