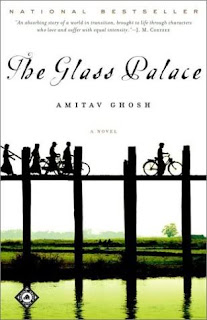 The Glass Palace by Amitav Ghosh

I bought and read this book for a class I took on Southeast Asian history. It begins as the British army invades Burma roughly 1885 and ends in 1996. The action primarily takes place in Burma and India with brief trips to Malaysia/Singapore.

Summary: Rajkumar is a poor orphaned Indian boy in Burma as the British invade. He sees Dolly, a servant of the Queen and vows to find and marry her. As the story continues he becomes a rich man, marries Dolly, and the plot shifts to their children.

I was engaged by the story almost immediately and found it a pretty easy read. It moves quickly and is pretty good historical fiction although if you might have problems if you are unfamiliar with the region. I was studying this in class but if I was reading it on my own I would definitely want to do more research. The reader meets many characters who represent some of the people, actions, and reactions of the region to war, colonialism, and economics. Interestingly while much of the book takes place in Burma the main focus is on Indians rather than the Burmese.

I had two problems with this book. First there is not enough time spent on each character and too many characters are introduced too rapidly meaning that sometimes the relationships were blurred in my head. Second huge amounts of time are passed over in sentence or two. 1914-1929 goes by in a blink and post-WWII receives only cursory attention while still important to the story. Although the book is already quite long (my paperback is 470 pages), I felt it could have been longer and then the story could have been fuller.

Overall: 3 1/2 out of 5 I enjoyed it and I'm recommending it to my mom but I feel there are serious flaws that detracted from the book.