The Complete Battles of Hastings, Volume 1 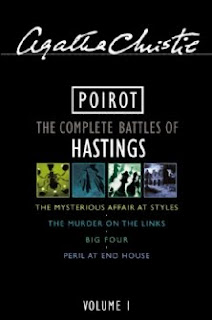 While I love mysteries, I've never been a big fan of Agatha Christie. However recently I decided to try to rectify that. The only Christie I had completed before this was The ABC Murders and I thought it was merely okay. But I know that her Poirot/Hastings books were among her most highly acclaimed so when I saw this book in the library I decided to check it out. The Mysterious Affair at Styles was her first book ever and the other three are among her earliest. I'm not going to post full summaries of each of these but instead I'll briefly describe my reaction to each.

All: I did not figure out who the murderer was in any of the stories-I'll admit that I tend to like mysteries I can solve so that may contribute to my indifference to Christie. Poirot annoyed me greatly in all of them. I think I'm a bit of an Anglophile (and I'm American) so it may be his stupid sprinkling of French phrases into conversation, his mocking of stolidly English Hastings, the description of his egg-shaped head (ALWAYS mentioned), or his belief in his superiority over everyone else (I accept this in Sherlock Holmes but I will not accept it from him!)

Styles: Was probably my favorite of the four; Introduces Poirot and Hastings and sets up their personalities and tendencies that will show up in later books such as Poirot's obsessive neatness.

Links: I felt that this one was merely alright-I had the most trouble getting through it.

Big Four: I really did not like this one as the point of it was not to solve a murder but instead to catch a criminal conspiracy that was covering the world. I guess it leaned more toward what I would consider thriller than mystery.

End House: This would have been my favorite except that I had grown quite attached to the murderer and was consequently disappointed when s/he was arrested.

While I did not love any of the books, I am still planning to read as many of the Christie books as I can get my hands on. I know I have The Body in the Library, a Miss Marple book, and I have several on my Christmas wish list so more will likely come.

Upcoming reviews: The Dante Club, Diamonds are Forever, The Curse of the Pharaohs, Wolf Hall (what an interesting assortment of books)
Posted by The Insouciant Sophisticate at 7:35 PM