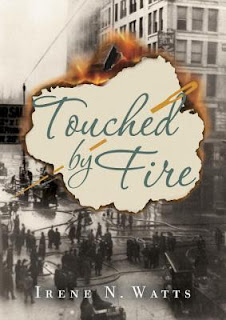 I'm a huge historical fiction fan so I always try to stay aware of the newest books for young readers especially when they're in an atypical time period. We've seen a lot of the Edwardian age and the 1920s lately, especially seeing some glamour from the period but a lot less about the darker side like the Triangle Shirtwaist Factory fire that anchors this book.

The book opens in Kiev 1905 and follows a Jewish family escaping a pogrom by moving to Berlin where they plan to save up to eventually reach America. This occurs in 1910 when daughter Miriam arrives and quickly gains employment at the Triangle Shirtwaist Factory where the infamous fire occurs.

Honestly I thought a lot more of this book would focus on the fire but the majority of it is on their life in Europe, facing prejudices, looking forward to a freer life in America. It covers all the work they do to save up enough money and the rumors they sift through about what life might be like once they arrive. I thought some elements definitely seemed sugarcoated or simplified for its target audience. As a sometimes cynical reader, I was consistently surprised by how nice everyone was. I kept thinking maybe someone would try to rob Miriam or physically threaten her and while such occurrences are referenced, she is mostly safe as she can be.

The ending was especially interesting. It is an epilogue jumping forward to 1933 Nazi Germany and looking at Miriam's nephew. I loved how it reinforced the themes of bigotry against Jewish people which has been so important throughout the book as well as following up on some foreshadowing from earlier in the book. At first I thought it was odd or that it was serving as set-up to a sort of sequel to this book but upon further reflection, I found it satisfactory.

While I found this book quite pleasant, it didn't have the emotional punch to the gut I would have liked to really connect with its contents. Everything just felt so young. I feel like this may be better suited for its target audience, which I would classify as middle-grade. It could serve as an introduction to the period, to antisemitism, to life for immigrants, to labor conditions, etc.