Where the Stars Still Shine 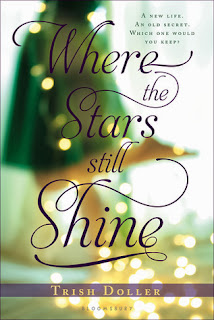 Though I didn't love Doller's debut Something Like Normal, finding the main character rather dislikable and the book overall just a bit too short for everything that was in it, I was still interested in checking out more of her writing and decided I'd give this one a shot if I could. I am happy to report that it went better!

Callie has lived a life on the run with her up and down mother after being technically kidnapped and kept from her father. After a mistake by the mother, Callie is reunited with her father and the big boisterous Greek family she had missed out on knowing all these years. Of course it is not easy to acclimate to this new lifestyle with accountability from parental figures, friendships to negotiate for this loner, and a tentative romance with the dreamy Alex. Can she reach a place where the stars still shine?

I was surprised by how realistic this book felt to me, given that I had a very stable upbringing, am not drop-dead gorgeous, and have never crushed on the hottest guy in the room (funny guys please!) and yet I felt really bonded to Callie and her situation. Everything she thought she knew is uprooted and after ten plus years on the run, it makes for a big change. Especially startling for her is the romantic relationship as Alex turns out to actually be a decent guy unlike pretty much every guy she's known previously (I personally didn't think he sounded hot in a physical way but I tend to be in the minority among YA book bloggers and have seen others gush a lot about him.) One qualm there is that he's twenty-two to her seventeen and will have a birthday before she does-so that makes him my age and I wouldn't want to date a teenager. No one else really seems to have a problem with this but I would have felt more comfortable if he had been twenty, say.

Which is not to say that this book only focuses on romance, as the above paragraph may have made you think that romance was the only thing going on here. I just feel like the romance is really important for Callie to move forward because she had a lot of messed-up ideas about relationships due to her mother's poor example. There is also Callie making a friend (or rather renewing a friendship) and taking on her first job as well as excursions to what sounds like an amazing bookstore that I'd love to visit. And the big thread is Callie trying to find herself a new place in a family as her father had remarried with two sons. I actually feel like more could have been done her. For example, Callie and the stepmother don't start off on the strongest footing and more of that tension could have been explored before moving toward resolution.

As a reader who likes things to be neatly resolved, I still feel like there are a few too many loose strings (especially regarding the mother and Callie's childhood abuse because I'd really like her to get some counseling or something to help her process it.) Other complaints would be wanting more of that big Greek family-there's really only about two scenes with them though they're on the outskirts for others. It's a more concentrated story, really focusing on Callie and what she's going through so I understand that the family couldn't naturally be integrated more but it's still something I would have liked.

Overall: If I kept writing this review, I think I would have picked at more flaws in the plot that left me feeling somewhat disappointed but in general I did really like the writing, the character of Callie, and just the flow of the book, which keep me interested in more writing from Doller.

Other Opinions:
Books Are Vital
Great Imaginations
Once Upon a Prologue
Rather Be Reading
Reading Extensively
The Flyleaf Review