ARC Review: When the Marquess Met His Match 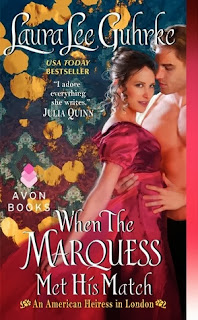 Source: Received an ARC through Amazon Vine in exchange for an honest (and quite early) review.

Guhrke wrote one of my favorite romances of all time, one of the few I've actually bought for my Nook (rather than waiting for a free copy to become available): And Then He Kissed Her, read pre-blog so no review. I haven't followed her writing super closely since then but decided that I'd like to check out this newest because of how pretty the woman's dress is on the cover (what a lovely color!) and because it was about rich Americans coming to London to snag British peers for husbands, which is just a fun storyline.

So our first character here is Lady Belinda Featherstone (awesome last name) who was herself a young rich American who fell head over heels for a British lord only to discover after the marriage was consummated that he only married her for her money. This disillusionment has sustained her in her widowhood, serving as a matchmaker for other young innocent Americans, to provide a happier fate for them. Meanwhile she lives a life of absolute propriety, content as the marriage broker without love for herself.

Our male lead is Nicholas, Marquess of Trubridge, a shameless rake whose reputation was spotted from a young age and has lived an indolent life unrepentantly. Until his domineering father cuts him off, forcing Nicholas to seek a mercenary marriage to restore himself to his former fortune. However he intends to be honest about his need for money and seek a bride he has at least some affection for even if love will not be the foundation.

The two are instantly at odds with Belinda particularly concerned about a young American friend and desperate to prevent other girls from falling into the same miserable marriage she had while Nicholas feels judged without understanding. Of course antagonistic sparks soon give way to friendlier passionate sparks as the two are powerless to fight their growing feelings for each other. This book had plenty of snappy banter and light moments to keep me easily engaged. I feel like it's a typical length for a romance and though I grew a bit tired of the baggage each character had, at least it is shed by the end for the HEA.