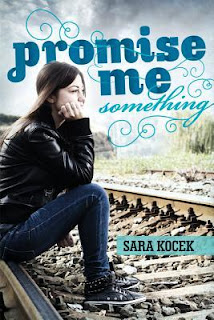 Promise Me Something by Sara Kocek
3.5/5 stars
Albert Whitman & Company, 2013
298 pages
YA Contemporary

For some reason, I thought this book was about a girl in foster care. Instead it is the seemingly more prosaic story about a girl in high school, wrestling with friendship and popularity issues albeit with some weird twists. That is exactly the kind of story I tend to like IF I can connect with the writing and the main character. Well, yes to the first and not so much for the second here.

Reyna is starting at a new high school without any friends but is soon adopted by Olive, the weirdest girl around. A few months pass with their friendship solidifying until Olive's secret is revealed whereby Reyna bails on her, seeking to gain entry to a different circle of friendship, one that relies upon mocking Olive and other unfortunates pushing Olive to desperate lengths.

I have long had a soft spot for high school settings so it's no surprise that this book caught my eye. While I notice many similarities with other contemporaries, there was something about the writing and plotting that set it apart. Perhaps it was the time devoted to friendships: Reyna still attempts to remain in touch with her third best friends who now attend a different high school, her rocky relationship with Olive, and her new friendship with mean girl Gretchen and her clique. Though there is a romance, it pales in comparison to navigating the tricky waters of girl world. My summary isn't the best, quite honestly but I hope that it captures some of the plot and it leads me to my feelings about the MC.

They are not positive to be blunt. Reyna is pretty cowardly and largely unable to take a stance, afraid to make any waves. I'm not saying this is unrealistic but I found it frustrating as Reyna consistently waffled about acting. Because she generally knew the right thing to do; she was just afraid to do it. And this is sadly so realistic especially in the cases of bullying as represented in this book. Furthermore Reyna's mother died when she was 7 and her father has lately been dating a new woman who also bears a lot of Reyna's anger and aggression. Though this was more understandable (the woman also caused an accident that seriously injured Reyna's father), it certainly didn't help my mental picture of Reyna as someone pretty unpleasant. Again, it's not fair, I was not a pleasant teenager either, but that's how I viewed it.

I'm not even getting in to the heart of the story, which is only alluded to in the publisher summary on goodreads as that would entail some significant spoilers. Suffice it to say that I thought this book took a weird turn but that it kept me engaged throughout and thankfully Reyna does show some growth especially in recognizing the ways in which she acted ungraciously. If you like offbeat contemporaries, this might be an interesting read for you.

Cover: The railroad tracks are surprisingly relevant-wouldn't want to spoil anything though!