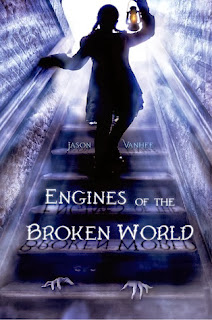 Engines of the Broken World by Jason Vanhee
2/5 stars
Henry Holt and Company, 2013
262 pages
YA Horror
Scheduled to release November 5

I'm not entirely sure why I decided to give this a read as I'm normally someone who assiduously avoids horror, being quite the scaredy cat. But I must have seen something intriguing to get it on my review calendar.

The book was very hard to get into and I found the plot a bit difficult to follow. Merciful and her brother Gospel Truth have just seen their mother die. As the world ends, they say goodbye to their two remaining neighbors, wrestle with the Minister, a preacher in animal form, and deal with the fact that their dead mother's body still seems to be moving around singing a haunting lullaby.

In fact the mother's body seems to be possessed by someone else and that is where my difficulty lies as I became confused about the rules of the possession. There also is a deadly fog and the disintegration and depopulation of earth so that only these four people are left alive (and not all of them even make it to the end.) So I would also classify this as a darker book, not just as in the horror genre but also for the themes it brings up and wrestles with. I think there were supposed to be some questions about faith and God especially in a Christian context but though I am Christian, I didn't really follow these conversations. I really did find the writing style confusing and distancing.

Well, what about the characters? They're okay-I don't see many unique personality traits to distinguish them among the sea of other characters I've read so don't go looking here for a character-driven narrative. I feel like this one is maybe a bit more philosophical, which may be another reason for my distaste.

Overall I respect what this book is doing and its very different writing style and subject matter; however it is very much not my kind of book and I did not enjoy reading it nor would I recommend it to people with similar reading taste.