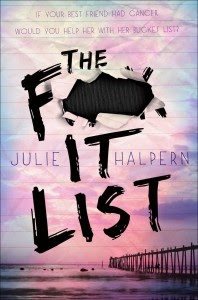 Based on the title, I expected this book to exhibit a lot of attitude, which is true. However I had not looked closely at the cover or synopsis so I did not realize it was about a best friendship where one person gets cancer and the other helps her with her bucket list as renamed for the cover.

Becca and Alex have been friends for years. But when Alex's father dies and Becca does something hurtful to Alex in the aftermath, they take the summer off. When Alex walks into the first day of school, she anticipates resuming their relationship only to be thrown for a loop when she discovers that Becca has cancer. Immediately she jumps back into friendship as they go through a wild and crazy year, with Alex attempting to fulfill Becca's bucket list on her behalf.

As a long-time proponent of female friendship in YA books, I was drawn to this book's friendship angle as soon as I determined that it was part of the book. Becca and Alex have their ups and downs just like any real relationship but they also love each other, totally get each other's senses of humor, and put up with the good and the bad about each other (for example Alex is very droll and sarcastic while Becca can be a bit softer). This relationship is at the core of the book. But there is also the family relationships and romantic interests for both girls (yes Becca has a cute neighbor who can stop by). I knowing the family relationship was there though I felt they weren't explored as much as they could have been. Obviously Alex's family is in turmoil with her mother and younger twin brothers dealing with the loss of their husband/father to the best of their abilities while Becca's mother copes with the diagnosis by turning to God and her rabbi. Maybe I wasn't as pleased with the portrayal of Becca's mother's faith after reading a couple of books that more intimately explored the Jewish faith last week-this one felt more mocking than sympathetic in any way. Alex's family was mostly presented in the coping stage and were nowhere near as well-developed as Alex herself.

The romantic relationships were much more satisfying. Shortly after the cancer news breaks, Alex hooks up with Leo and their relationship took so many interesting twists and turns. The physical plays a huge role and I thought it was very well-written though the fact that it doesn't fade to black may be a turnoff to some readers. The emotional comes second as Alex takes forever to face the truth. Becca's love story gets less page time but it has some cute moments as well.

Overall: Not your typical cancer story with humorous moments far outweighing the sad though melancholy tinges every interaction. I was surprised by how much I laughed at Alex's snarky comments and her exchanges with Becca and co. I thought it was a surprisingly funny story and I hope you all will enjoy it.

Content warning: A lot of swearing and sexual exploits; tons of attitude; I would recommend this for the older YA audience.

*Sorry for the super early review but this was just archived on Netgalley; when books are archived early, they get reviewed early too-it's the only way I'll stay on top of things.