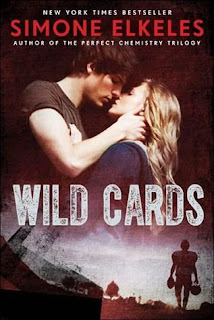 I've seen Elkeles' books around but thought they just looked very melodramatic in a way that would not appeal to me. While this one did not seem any less melodramatic, it did promise a look at high school sports, which is one of my soft spots in reading (odd as I never participated in high school sports nor do I watch.)

Having finished this book, I think it is a bit on the melodramatic side with main characters Derek and Ashtyn having so many issues in addition to their alternating perspectives (reminded me of Pushing the Limits) but the weaving in of football and their sizzling sexual tension really won me over and kept me reading.

Derek seems to be a spoiled rich kid, getting kicked out of his fancy prep school and heading home, only to discover that his young stepmother Brandi is moving herself, her son Julian, and now Derek to her hometown outside of Chicago while Derek's father serves his latest assignment in the Navy. Derek is pissed about this change but the situation perks up when he meets Brandi's younger sister Ashtyn, who just happens to be his age and is the perfect melding of tough football-playing jock and all woman curves. She is less than thrilled to meet Derek and the two clash...repeatedly. Ashtyn for her part is pissed about the people in her life who leave and let her down, craving a real relationship that will last. Derek only goes after girls who are down for a good time as he avoids relationships following the death of his mother. Needless to say sparks fly!

The more I think about it, the more I like the comparison to Pushing the Limits. I suspect this book also shares some similarities with Elkeles' previous work but since this is my first (though certainly not my last) encounter with her writing, I cannot comment on that. My favorite part, definitely, was seeing Ashtyn going after what she wanted-battling her jerky ex's manipulations and fighting for a real relationship with Derek despite his repeated protestations that all he could offer was one night. Ultimately I thought the ending was a bit rushed with Derek's grandmother providing a too good to be realistic but welcome burst of energy and drive. Still I really liked all of the characters especially sweetheart Julian who was not featured enough for my taste. Happily it appears that this is the first in a series so we'll have more room to play in this world!

Other Opinions:
Good Books and Good Wine
I Swim For Oceans
Tattooed Books