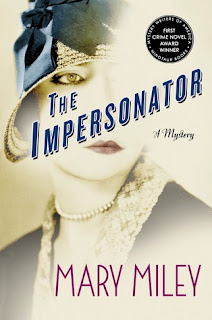 This book only popped on to my radar after receiving an email from Netgalley informing me of its premise and assuring me that I'd enjoy its mystery and lively prose. The synopsis sounded intriguing and I do love a good adult mystery involving stage and pretense so I decided to give it a shot.

When Leah feels the watching eyes of a man on her while onstage, she is somewhat startled. Afterwards he approaches her and makes a proposition: she pretends to be his long-lost niece to inherit a fortune. After her luck runs out in vaudeville, she is desperate enough to give this a try. With Uncle Oliver's aid, Leah is transformed into Jessie Carr and reunited with her grandmother, aunt, and four cousins who are consequently disinherited. The more time she spends as Jessie though, the more convinced she is that the real Jessie was murdered and the more determined she becomes to find out who did it.

So it definitely took a while for this book to get going. But once it did, it was good! There's really quite a bit about Leah's vaudeville life, which was interesting especially the references to familiar names but I preferred seeing her become Jessie, absorbing all that knowledge and turning it in to her finest stage performance yet. As she settles in to the life, she also grows closer to Jessie's family and seeing those relationships form and deepen is what really won my heart. Her kindness to her young cousins Caro and Val especially charmed me-she taught the girls poker, some vaudeville routines, and just brightened their very sheltered lives. This also allows the reader to see her deeply held principles and commitment to justice. She feels very certain that Jessie was murdered and as evidence builds about a prime suspect, she relentlessly pursues the leads despite great personal risk for herself.

An important subplot is Prohibition including the fact that Oregon, the state in which this is set, went dry in 1916, before National Prohibition, something I did not know! I loved getting that and some other little tidbits that helped immerse me in 1924. Bootlegging plays a huge role in the story and it was cool to trace that. Though I've read quite a few books set in the 1920s, they tend to be YA and didn't feature alcohol as prominently as this adult book does.

The mystery was fairly straightforward I feel-there really weren't too many suspects and Jessie latches on to the right one pretty quickly though a twist in the last chapter made me gasp (for those who've read the book: David). The real spark to the mystery is a paranormal element where she seems to feel the ghost of the real Jessie urging her on and giving her strength when she needs it. Those parts were a bit weird to me but I assumed it was just Leah's strong faith in them rather than the author actually positing that such spirits were real.

Overall: I quite agree with the publisher promising an engaging mystery and lively prose-that is what I expected and what I received. The actress playing Jessie is a very sympathetic protagonist once you get past her role as con artist and the book moves at a good clip. Definitely worth checking out if you like the sound of the story as well.