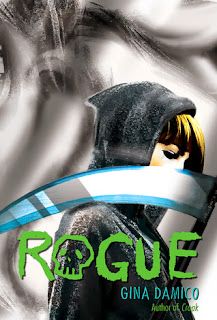 Though the previous books in this trilogy Croak and Scorch didn't really impress me, I was still caught up enough in this trilogy to want to complete it when I had the chance. My thoughts aren't super detailed and I wouldn't want to give spoilers anyway so below are some things I did and didn't like about this book.

To be perfectly honest, I don't really like Lexie or the other characters very much. I was disappointed with her damning choices in Scorch and while she is challenged on that in this book, I never really clicked with the characters as presented. On the flip side, I love this quote from the author's acknowledgements: "'I admire your willingness to kill off your characters,' which is really just a polite way of saying, 'I think you might actually be a serial killer, and I'm fine with it" (V-VI). These were hilarious acknowledgements and I do admire Damico's willingness to kill off killers-basically no one is safe especially since the book is told in third-person. Whenever a book is told in first-person, I'm fairly certain the narrator isn't going to die; less certain if it's alternating first-person.

That humor also rings throughout the book. There are many snappy quips that help to lighten what is in many ways a pretty dark book. As in Scorch, I apparently like visiting new places. In that book, I loved checking out DeMyse and here we have Necropolis. Though the characters spend perhaps more time there than the plot could handle, they were also my favorite scenes as they attempted to find a portal. In general, I thought the plot was very unpredictable and able to spring into any direction.

Something I didn't like was my difficult recalling characters. If you wanted to read these books back to back, that would be a very good decision because when old characters are brought back, they do not receive much introduction. It is assumed that you will be able to recall who they are. I think I have a handle on everyone but I'm not entirely sure (and since I don't love the characters, I don't mind that uncertainty.)

Lastly we have the ending, which I can see people being very split over though it's nowhere near as controversial as Andrea Cremer's Bloodrose (wow-there are some angry reviews on that one!) Personally I found it satisfactory. I'm not really sure how I wanted the series to end and this was an acceptable solution that is mostly optimistic though leavened by the sadness and losses of battle.

Overall: Read this if you want to finish the series-you really should read them in order as I do not think you would be able to follow them otherwise.

Cover: Definitely fits in with the others-this time though I find the bright green of the title and blue of the scythe a bit jarring against the more muted color palette of the background.

Other Opinions:
A Reader of Fictions
Chapter by Chapter
Singing and Reading in the Rain