Ramblings and the Week to Come 08SEP13 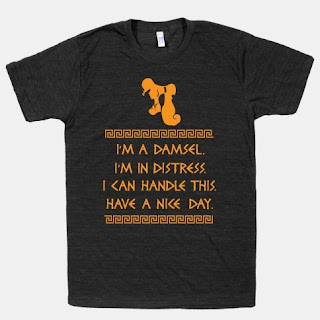 I'm not sure this has ever come up but I'm a huge fan of Disney's Hercules with its amazing integrated songs and especially the sassy Hades and Meg. When I saw the above shirt on Pinterest, I had to have it. The only thing that would make me happier is seeing one with "I'm a big tough girl. I tie my own sandals and everything."

In Real Life:
It was a very busy week for me! Besides work, I had a boot camp three times this week plus softball on Thursday (a loss sadly though in consolation we were missing people and I hit three singles and scored two runs) and a 5K on Saturday. Consequently I'm a bit sore now but I'm trying to stay loose and stretched. At least all of these activities are fun!

Blogging:
After a pretty productive Labor Day weekend, I struggled to focus on reading. This is partly personal because I'm dealing with some things but also is partly me reacting to the weather, which is positively enervating. I know it usually gets hot in September in my area but I don't remember it being *this* hot last year. I don't really want to do anything: not read, not write, not comment, nothing! But I should have more free time today so I'm planning to finish two books and get their reviews ready in addition to starting a third.

Television:
I watch a pretty decent amount of television but don't always feel I have a lot to say about it. This week though marks the series finale for one of my family's favorite shows, airing on USA Network: "Burn Notice." Are any of you familiar with it? I love its mix of action, mystery, drama, and comedy into a satisfying end product. We are sad to see it go and very nervous about the finale as everything is ramping up to the extreme. Is someone going to die? Will we get the conclusion we really want?

Football:
NFL football is back! My Eagles debut tomorrow. Our local paper predicted a 6-10 season for them but Sports Illustrated more optimistically predicted 8-8, which was my wish for this year given our pathetic 4-12 season last year. One odd note for me is that I feel like I'm in-between for sports. I know people who can quote statistics, play fantasy football, and are very knowledgeable on the game, etc. Then I know people who don't watch sports at all but might attend a viewing party. I care more than the latter kind of people but I am not as interested as the former. Does this in-between state sound familiar to anyone else (whether or not it's in regards to sport)?

Week to Come:
An eclectic mix, per usual. We're going across genres and time periods for the YA weekday reviews and then venturing into adult territory for Saturday. I've seen all sorts of ratings for these books and am excited to share where I fall on the scale (translation: I have not finished any of them yet so even I don't know what I think! I'm a fast reader though so I should be ready on this schedule.)

So that's what's up with me-what's going on with you?