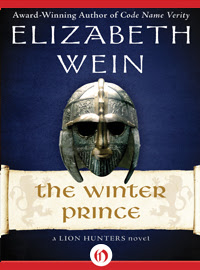 After adoring Wein's Code Name Verity (my favorite 2012 release and still highly recommended), I was thrilled to see this older release from her. My excitement only grew after reading Liviania from In Bed With Books' enthusiastic review!

Unfortunately I ended up strongly disliking this book, I think largely because of my expectations. The Arthurian legends I am most familiar with are ones involving Merlin or are light like Disney's The Sword in the Stone. They are not dark with unfamiliar names, disorienting passages of time, and a confusing narration. With character names like Artos, Ginevra, and Medraut (I was expecting Arthur, Guinevere, and Mordred), I think this book harkens deep to tradition but it wasn't what I wanted. And the novel is written as a letter from Medraut to his godmother Morgause with frequent use of "you" that kept making me think he meant me even though that made no sense.

Most of the book is about Medraut's jealousy and anger of and toward his half-brother Lleu who is a legitimate son of Artos and heir to the throne. Medraut's hatred has been nursed by Morgause and leads him to take a dark path in regards to his relationship with Lleu. Though I can understand how Medraut would have those feelings, I didn't always follow why he took the actions he did and when I was able to follow, I often found them despicable. Basically every character is pretty awful and while I don't expect characters to be perfect, I want to be able to like at least one of the important ones and that didn't happen here.

Overall: I just could not connect with the writing or characters here; it was a slog to complete and I will definitely not be finishing this, instead preferring to focus on Rose Under Fire, which will hopefully completely enthrall me.

Other Opinions:
In Bed with Books
Susan Hated Literature
The Book Geek