OK, I have finally had a chance to get down on paper all my thoughts about the RED concert experience. It's on the long side, which is part of the reason it took so long to prepare, and I'm afraid there is going to be a bit of ranting about the process of getting to and from the concert venue but I can assure you that I only have positive things to say about performers Ed Sheeran and Taylor Swift.

The first rant is about the poor infrastructure particularly of I-5. I asked my dad if that is the state or city's responsibility and he said to blame San Diego and I can assure you that I do. Because of the poor maintenance and design, we ended up missing the first opening act, Casey James. Now I don't really care but I did care that we...
...got there late just as Ed began his set with "Give Me Love," a song that I initially didn't like much but now I'm kind of obsessed. Have you seen the music video about Cupid distraught over her inability to fall in love? Anyway I totally adore this song now. He continued with "Grade 8", "You Need Me, I Don't Need You," "Lego House" (among some covers) before ending with "The A-Team." He was amazing and I'm glad that we at least got to see most of his set. The above picture was taken by my sister on her iPhone from one of the large screens. I think Ed looks *very* good, presumably because of his hair cut (I always think guys look super cute after a hair cut.)

Ed finished about 8, leaving us half an hour to wait for Taylor. We dressed for the occasion in red with Keds and the rest of the audience did too. I think the only people not in red were the security people. There were also loads of light up songs (I admire the ingenuity of the people who had "ED" signs and then needed to only add an "R" when Taylor appeared.) Though this could have been dull, it was not for the screens promoted her various commercial ventures like Keds and her perfumes (not a fan of the Taylor one btw and my dad agreed that it smelled horrible; haven't tried Enchanted or Wonderstruck) as well as some random things like trivia and that great a capella version of "I Knew You Were Trouble" until the sound on the screens was interrupted by Icona Pop's (uncensored) "I Love It" followed by Lenny Kravitz's "American Woman" and then the show really started.

The anticipation builds as the music plays until finally Taylor makes her entrance with "State of Grace." If you read my album review, you know that I'm not the biggest fan of this song but it does seem to have been written to open the show so I appreciated it in that context. She had an introduction speech talking about how thrilled she was to see us and how much she loves San Diego before going smoothly into "Holy Ground" which features some inspired drumming. Next up was, to my opinion, an extremely long speech about color and how one particular color runs through the whole show. The next song was of course "Red."

This led to the first outfit change (keeping in mind that all of her outfits have red with some touches of white and/or black) and "You Belong With Me"-I loved her glitter here as well as the gloves (why don't women wear gloves more? I only wear them to keep my hands warm but I'd love to wear an elegant pair and pretend I was Grace Kelly or Audrey Hepburn.)

One more costume change covered by a video introduction to "The Lucky One" which seems taylor-made (haha) for a story to accompany the song. My sister said the video reminded her of Britney's (fabulous-my comment) "Lucky" and I cannot disagree with that. Then another little speech, this time about bullies and basically how you will never be able to escape them, launching us into "Mean" which yes, Taylor still performs with a banjo. Now some early stops got "Stay, Stay, Stay/Ho Hey" but San Diego did not, to my disappointment (I highly recommend you search this out, especially because she gives a great introduction.) So our next song was actually "22" and this is where she left the main stage for a smaller stage closer to the cheap seats, allowing more people to see her up close. Before that though, we saw clips of Taylor going from birth up to now (please note that she is 23 now!)

Her first song on the small stage is a "secret" song. I had been hoping for "Starlight" after seeing one playlist but since we were nearing back to school time, she went with "Fifteen." I love Taylor but "Fifteen" is my second-least favorite song of hers so I sat kind of bored. Let's go back to "Starlight": I was singing a lyric in the first verse as "I'm a Barbie on the boardwalk" but my sister corrected me that it's actually "I met Bobby on the boardwalk." This makes so much more sense:
1. Referencing Barbie would be anachronistic
2. It would also just kind of be a random thing to say, eh?
3. This brings in the guy and explains their conversation throughout the song, really setting the stage

Now back to the show and her lovely duet with Ed, "Everything Has Changed." I think I like it more live than I do in the studio so that's definitely another one to check out. The quieter more contemplative mood continues with "Begin Again" and while all this is happening, the stage has been spinning the whole time, allowing her to face the entire arena. Then she switches out guitars with a perfectly strummy one to begin "Sparks Fly" before flying over the audience to return to the main stage.

Another costume change for "I Knew You Were Trouble," beginning in a big white dress before it's ripped off to show a tighter black number (very similar staging to her AMAs performance, which my sister and I were fortunate enough to see last November). Then we get "All Too Well," which is definitely one of my favorite songs and was my favorite part of the show. She spoke about the process of writing it, how she gets some of her best writing done between 2 and 4 in the morning, and how she remembered the relationship upon which this is based all too well. In my opinion, this was the real showstopper and I was just in awe.
After that, it's a quick jaunt through "Love Story" in a white dress with one of her dancers hilariously overacting as Romeo, another costume change for "Treacherous" with part of the stage lifting her up and down in what could be deemed a treacherous way, and concert closer "We Are Never Ever Getting Back Together" as a circus. I admit I would have loved for her to do the speaking part like she did at the Grammys, to say something like "Sorry but I'm performing for a sold out show in San Diego" but she just did it as on the CD.

Overall it was an amazing experience and I'm so glad I trekked out there to see her. One of my qualms had been her pitch problems, which I had heard before but I didn't notice anything egregious during this concert. Taylor seemed made to perform on stage as she loved our adoration and accepted it graciously.

Lastly is another little complaint, which is that our seats were on the opposite side of where we parked. No problem, we'll just walk around through that shortcut, right? Except that Taylor's many trucks were blocking and security would not let us cut through. A bit of a downer on what was otherwise a fantastic night.

Oh, and souvenirs? But of course! My sister and both got the below shirt, which also has the tour dates on the back :) And is currently available for purchase online along with loads of other merchandise. I am hopeful that Taylor will release another CD/DVD like she did for her "Speak Now" tour because I definitely want to own that! 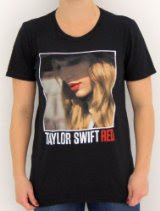 One really cool thing was that I got an email the next day with a little "thank you" note-not sure if it's because I preordered tickets with a special code or just that my address is local but it was a nice touch and I'm not sure anyone else would do that.

So that's my experience. This ended up being super long so thank you very much if you made it to the end (almost 1500 words, yes I checked). Is there anything I didn't touch on that is a lingering question for you?