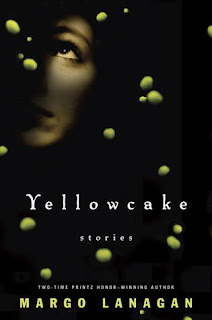 I have been very interested in short stories lately so I was thrilled to see another collection available for review. I wasn't very sure about what to expect as I hadn't really noticed any other reviews. To be perfectly blunt: this book was weird. There were a few stories I really liked but most of them went way past me and were super uncomfortable (like the one from the point of view of a rapist) or just plain confusing (like last story "Eyelids of the Dawn"-I'm not really sure what went on there.)

In an effort to keep this positive, I'll just share about the three stories I liked and feel that I at least partially understood. The other seven either completely bewildered me or disgusted me (like the cruel fascinator who curses two girls just for having the audacity to not fall in love with him or the aforementioned rapist.)

"The Golden Shroud" is a new take on Rapunzel, focusing far more on the prince and Rapunzel's magical hair while the girl herself is pretty wimpy and weak. I would have liked a stronger heroine in this take on a fairy tale but I appreciated its familiar context at least.

"Night of the Firstlings" was incredibly confusing until I figured out that it was during the time of Moses when the plague is sent to kill all firstborns and the Red Sea is parted. As I said, the beginning of this was very confusing to me but I warmed up to it as I continued reading. I guess this shows how careful reading pays off.

Lastly we have "Ferryman" which I was highly anticipating after seeing it mentioned on the back cover. I was right to look forward to it as I really liked it-possibly my favorite. This relies on Greek mythology as well as a deep father-daughter relationship.

Overall: A set of stories that does not hesitate to take you to uncomfortable places; the kind that rewards careful reading and an adventurous mind.