Ramblings and the Week to Come 11AUG13

Ramblings:
Not too much to share this week. I have being feeling somewhat lackluster, meaning not up to doing anything including reading and especially blogging/commenting. I do have a full week of reviews planned but may have to cancel them if I can't motivate myself more :( As of this writing, I've only finished one book though I've started the second and plan to finish at least one more today. I really want to get ahead on my reading as the week of the 18th marks the start of orchestra and softball, both of which will take up quite a bit of time that could otherwise be spent reading. Just because I'm feeling a bit down though doesn't mean I don't have some good stuff this week like...

Red:
I've written before about my love of Taylor Swift and I'll be seeing her this week! I don't really go to that many concerts so this is my first one of hers. My sister and I are so thrilled! We are also Ed Sheeran fans so that's just the icing on the cake for us. I've already browsed their set lists and just can't wait for this experience. I may even write a post about it if I end up having time. 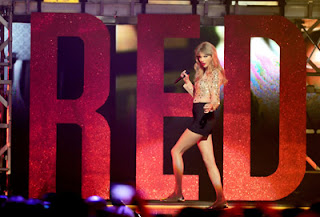 Soccer:
Today Manchester United takes on Wigan Athletic in the FA Community Shield game, something which seems to not necessarily be that important? Anyway last year I discovered how fond I am of soccer so I'm thrilled to be back to watching the beautiful game. It looks like NBC is going to be airing games too (watch the hilarious Jason Sudeikis ad for this-I really enjoy his comment about tackles which are very different depending on what kind of football you're discussing) but I kind of like my Fox Soccer channel and that is the channel I plan to continue to watch.

The above are all egalleys for 2013 YA releases. However I may substitute in a post about library books Phoenix by Elizabeth Richards and/or The Distance Between Us by Kasie West. We'll see what gets read first!