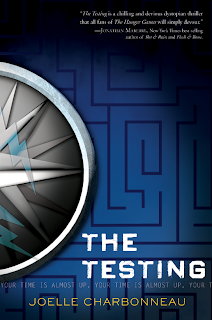 I requested this from the library for my sister who read about it in a magazine and liked the sound of it. I liked the comparisons to The Hunger Games. She ended up saying she found it boring but I tend to be less picky than her and I already had it checked out from the library so I proceeded. I can fully see how part of this merited its The Hunger Games comparison but I personally found it lacking in multiple ways.

The titular testing comes from the government, where they attempt to select the brightest and best of recent high school graduates and put them through four rigorous tests to determine who will continue on to university. In this post-apocalyptic world, the citizens have worked hard to build a new life for themselves and going through the testing is one way to provide a much better life for yourself (through this new career) and your family (who receive a payment for your loss). Cia Vale is thrilled to be selected for The Testing even after warnings from her father who survived the tests himself. Once there, she has to decide who she can trust and who will happily kill her.

My general takeaway from this book is that we just didn't click. I had to force myself through each page instead of eagerly flipping through them. For whatever reason (writing, my mood, etc.) I could not connect with Cia who narrates and despite my love of students undergoing testing (like in Ender's Game), I didn't feel engaged with that part either. I feel comforted knowing that my sister wasn't impressed either and that there have been plenty of neutral to negative reviews out there

Of the four tests, it is the last one that brings to mind The Hunger Games. The first three take place inside the city grounds. The fourth deposits the remaining candidates (many have already died by that point) some days away and forces them to fend for themselves as they attempt to make it back. Some candidates use that opportunity to kill the competition. But even this failed to compel me. I don't know if I've read too many books in this genre (which isn't really my favorite anyway) or what exactly explains it but I found most of this book super dull.

Especially dull are the characters. Main character Cia is very intelligent, no doubt an that is clearly shown to us. She also possesses good instincts, knowing who to trust, when to hold back, and when to go full throttle (for the most part). I feel like she's exactly the kind of heroine I ordinarily love but not here. Her friend/love interest Tomas is even worse-I kept thinking he was going to turn out to be quite evil but that probably would have been too interesting.

Overall: I have so little enthusiasm for this book and cannot encourage you to check it out unless you are a very serious hardcore dystopia/post-apocalyptic fan who can't get enough. Lovers of contemporary would do well to steer clear.

Other Opinions: Some of my blogging friends had more positive things to say-read their reviews to excite yourself about this book!
Jen Ryland/YA Romantics
My Precious
New, Borrowed, Used
Once Upon a Prologue
The Book Cellar