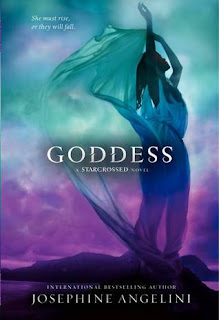 Though first book Starcrossed wasn't exactly a favorite, I was intrigued enough to pick up second book Dreamless where the dreamy Orion was introduced, his charisma far outshining the dull angry Lucas in my opinion though I sensed that Helen was too stupid to realize it. Thus I entered this third book with some trepidation because I could read the writing on the wall and didn't foresee the happiest of endings for my beloved Orion.

Though I try to remain spoiler-free but I'm not sure how successful I was. I talk around a lot of plot points but if you don't want any spoilers, you should probably steer clear.

I know Helen is technically the main character but I continually found her dull so we're going to start with Orion. More of his history is revealed and, man, is it tragic. If you think of Greek stories as containing tragedy, then he is a prime example. Yet he still retains a good heart and optimistic spirit despite how low life has brought him. To my mind, there was not nearly enough of him and that is probably a big reason for my disappointment with this conclusion.

But there were others, don't think I didn't have other reasons! Another reason was how long I struggled to get interested. From the moment I picked the book up, I felt disengaged. For all the stuff that should be going on, this book was quite boring. Around the middle there are some duels that perked me up but mostly I struggled with the new influx of information. For example, we get a lot more background on how our current heroes have the same faces as previous generations and I found that super confusing. Another annoyance was the flashbacks Helen experiences from previous incarnations that had the Face-gah did that bore me.  Also there are the changing alliances of all the characters, which was a little hard to track.

And even beyond Helen's poor taste in men, I still never really connected with her. By the end of the book, she has so many fantastical powers that any relationship I might have had with her was long erased by her departure from pretended mortality. The romance I don't like continues to be starcrossed and there is a lot of whining about that before the inevitable conclusion.

Overall: A very disappointing conclusion; I could have tolerated the shortchanging of my beloved Orion if I had found the writing as engaging as in the previous books but even that was missing in this go-around. Still if you've read the first two, you'll probably want to finish just to be able to say that you did.