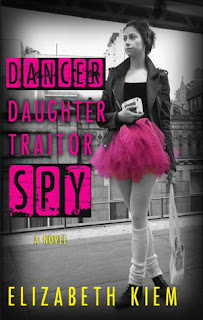 So many thoughts! This caught my attention due to its title and its kind of similarity to Tinker, Tailor, Soldier, Spy (as the publisher synopsis references John le Carre, I suspect that is not unintentional). Additionally the cover is quite striking with its vivid pops of color (pink and yellow is combination I am loving this summer). And my third reason, like I need a third reason after the intriguing first two, was the setting in 1982 Soviet Union. Have you ever read a YA book set then and there? I don't think I have and I always want to try the new and unique.

The book started out promisingly following young Marina whose dancer mother is very important to the USSR, resulting in quite a cushy lifestyle. However when her mother discovers something she should not, Marina and her father flee to the US trying to build a new life. However they cannot forget her mother left behind, abandoned and their attempts to reunite lead to tragedy.

Though I didn't mention it in my brief summary above, Marina (and her mother) has a special power: a second sight of sorts. Wow did I hate that element. I found it confusing and unnecessary in a book I was already struggling to follow. When I read historical fiction, I expect to either find myself in what I consider a somewhat glamorous world that I know a lot about (like Regency London) or to be educated about a time period I don't really know (such as the USSR in any period). But I never quite followed the KGB plot-perhaps that confusion is supposed to mirror the confusion and suspicions entertained by people during that period. Regardless, I did not enjoy it and really struggled to finish the book.

One plot point I did like was Marina's attempts to acclimate to life in the United States and the portrayals of her and other immigrants' experiences in a hostile new world. Another was the moments of dance though brief and mentions of music, which are more elaborate. There is also a romance that was okay and an excellent Valentine's Day Massacre dance scene that I really liked.

Overall: My unfamiliarity with the time period made this a difficult read that I struggled to finish. I found it all very confusing and never connected with any of the characters.

Other Opinions:
I Am, Indeed