ARC Review: The Truth About You and Me

Since I ran out of time to post yesterday, you're getting two reviews today! 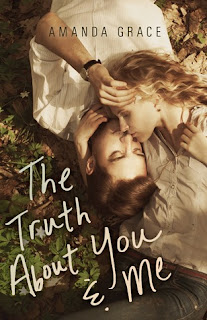 The Truth About You and Me by Amanda Grace
4/5 stars
Flux, 2013
225 pages
YA Contemporary Romantic
Scheduled to release September 8

I'm not entirely sure why I wanted to read this book as forbidden romances like student enters relationship with her professor don't tend to be my preferred reading material: I like more comedic books if possible. But it's always nice to sink my teeth into a contemporary and I really liked this one.

The plot is pretty straightforward. Sixteen-year-old Madelyn just completed her sophomore year of high school but with her excellent grades, she is enrolled in a program to start taking classes at a community college. On the first day of biology class, she meets Bennett Cartwright who seems instantly attracted to her, listens to her, and supports her under the pressure she feels from her parents. The problem though is that he's her professor and he thinks she is eighteen. The novel traces their relationship up to the fateful day when everyone finds out as well as an epilogue where they meet again two years later when she actually is eighteen.

First I must mention how this book is written in second-person perspective with all of her "you"'s being directed at Bennett as this is a letter to him, as she tries to exonerate him from his role. Earlier I reviewed The Winter Prince where I hated this technique but for some reason it really worked for me here. I guess there are no firm rules about what I do and do not like in books; just sometimes things please me and sometimes they confuse me.

Second I found Madelyn oddly sympathetic. I'll confess that I had a few crushes on professors, unsurprising when you consider that I value knowledge and they knew a lot, but obviously nothing approaching her level. My parents were also not as pressuring as hers nor do I have an older brother so it's not like we had a lot in common, as is usually the case when I identify strongly with a character. Yet Madelyn's desperate attempt to try to write her wrongs while also still struggling to figure out who she is and what she wants touched me.

Third, mostly added because I like to try to have three points, is that Bennett is oddly a cipher to me. The main personality trait I have for him is that he loves teaching, its order and structure appealing after a childhood with scatterbrained parents. Because of this relationship, he loses that. Still I do wonder how he could not confirm she was eighteen. Basically I just don't have strong feelings about him but he doesn't seem like a jerk so that automatically makes him better than a long list of other YA love interests.

Overall: Though I can see how this book is definitely not for everyone (the very premise, the writing, the fact that the romance really isn't the important part), I liked it and found its easy writing style to be a perfect read for a few hours.

Other Opinions:
Good Choice Reading
Once Upon a Twilight!
Some Like it Paranormal