ARC Review: The Song of the Quarkbeast 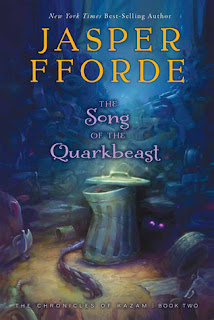 The Song of the Quarkbeast by Jasper Fforde
4/5 stars
Harcourt Children's Books, 2013
289 pages
YA Fantasy
Scheduled to release September 3

After enjoying book one The Last Dragonslayer, I was pleased to get an early peek at its sequel (not really early as it has already been released in the UK). I picked this up one weekend expecting more hilarious shenanigans from Jennifer Strange and her coterie of magicians and assorted associates. As I anticipated, this was quintessentially Ffordian. I think if you enjoyed the first book and Fforde's writing in general, then you'll want to check out this sequel.

This go-around makes mention of the resurgence of magic following the events of the first book and continues some of the same threads but mostly the story is new, giving us further insight into the world of the Ununited Kingdoms. The big threat is over the future of magic with the king and wizard Blix eager to monetize it for their own gain while Jennifer and her crew want it available for everyone. These divergent philosophies battle it out, culminating in a bridge rebuilding competition to decide the fate of magic.

But really the plot doesn't much matter. Instead you'll be enchanted by the charming writing with its asides and the way that everything will come together. Small details are carelessly tossed to the side but later events prove how we had all the clues we needed, if only we could piece them all together the way Fforde does!

Jennifer continues to be plucky as foundlings are and we get to spend some time with the mysteriously disappearing and reappearing Great Zambini as well as all the fun characters from last book. I think my favorites here were greedy King Snodd IV and the King's Useless Brother (this is his actual title from the book) who is easily distracted by just about everything.

Overall: Though you could probably read this as a standalone, I do recommend checking out the first book beforehand and just being prepared for a zany ride!

Other Opinions:
Adventures of a Bookonaut
Lauren's Loquacious Literature (how cool is that blogname? I'm a sucker for alliteration)
Yolando Sfetsos