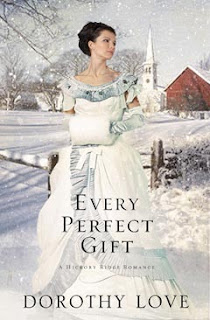 Source: Received a free copy for review from the publisher via Booksneeze.

My reviews of Beyond All Measure and Beauty for Ashes

Well, I read the first two books in this series so I was certainly invested in returning. Our heroine this time is orphan Sophie Robillard, who was adopted by Ada and Wyatt at the end of the first book. She has now grown into a fine young woman who struggles with her lack of knowledge about her blood relations and the subsequent torments she endured. Her ambition is to return to Hickory Ridge and revitalize their newspaper in the wake of the building of Blue Smoke Resort.

One of the first people she encounters is Ethan Heyward, who is in charge of getting Blue Smoke built along with his wealthy senior partner Howard Blakely. Although the pair clash initially due to her willingness to report on the less than ideal living conditions, a mutual respect develops. But both have big family secrets that have left scars threatening their future.

Sophie is a lovely woman-she is strong and tenacious. I love her go-getting ways, feminism, and optimism (it's 1886 and she's sure woman's suffrage is only a matter of time-try 34 years away!) As a writer, she has a commitment to the truth and trying to help people, which does in a variety of ways. Ethan was a bit harder to get to know since Sophie is the focus but he is also an upstanding hard worker and the pair are well-matched.

As the two fall for each other, more obstacles crop up with some well-resolved and others less resolved to my taste. Still, I think this was my favorite of the series and if you've read the others, you'll certainly want to read this one.

Cover: I do really love this cover-the white is so striking and pretty although something with newspaper might have been more fitting.