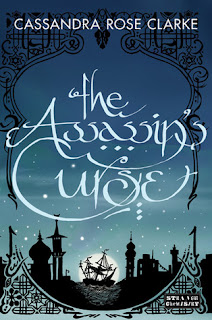 *SPOILERS ARE CONTAINED IN A MARKED SECTION OF THIS REVIEW*

I wanted to read this book after loving the cover so much; I was also very swayed by the fact that Small Review put this on her special shelf (see below for link to review). For me, this book was good but not great. I'm not entirely sure what I found lacking but I just was not as blown away as I had hoped.

Upon opening the book, I read "I ain't never been one to trust beautiful people..." (pg 7) indicating to me that the book might be written in some sort of dialect. This is true and continues throughout the book. However it is still very easy to understand. I found it surprising as I've tended to find that fantasies have a more familiar language while this was very casual along with being representative of the narrator's level of education.

That narrator is Ananna of the Tanarau (a clan of pirates) and the beautiful person she's referring to her is her intended Tarrin of Hariri, son of another pirate captain. This arranged marriage would combine wealth and status-the perfect beginning to a marriage...for the parents. The children are less thrilled with Tarrin wanting to get his colors so he can sail and Ananna wanting the same. Tarrin's highhandedness turns her off and sends her feeling. But the Hariri will not be so disrespected so they send an assassin after her. After saving the assassin's life, some complicated magic is unspooled, cursing the two to remain together unless they can break the curse.

I was already very invested in Ananna, as the spirited wannabe pirate and I especially admired her competence. So good to read about a young woman who can mostly take care of herself and is able to admit when she does need assistance, as we all do at times. Less exciting was the assassin Naji who knows a lot of cool stuff but withholds much of that information from Ananna and by extension the reader. That's frustrating. For the most part, I was able to seat back and enjoy the ride but I think that was part of the reason why I didn't love it. So much was held back that could have been told earlier because Naji did know. Their relationship has a certain element of romantic tension, which will be appealing to others but which I did not totally love, again because of how he hides information.

The other problem was just a feeling that the book is maybe a little overstuffed. Pirates, assassins, magic from the north, floating islands, impossible tasks: some stuff that is teased on the back cover doesn't happen until almost the end and I was anxious waiting for it. I'm still interested in reading the next book but it's going to be on the back burner.

There was a part of the book that I really loved though, which is contained below in the spoiler section to end the review. I don't think it's a huge spoiler (no one is anyone's father for example) but it takes place about 10 pages from the end so I figured most people who haven't read this book might not want to know about it yet.


Okay, so the way to break the curse is to complete three impossible tasks. The first two are unimportant to me at the moment but the third "is to experience true love's kiss" (pg 285). At this point, it is so obvious how in love Ananna is and she is even able to admit it to herself if not to Naji. Because she knows it's true love, she knows that the third task is not impossible and thus the other two must not be impossible either. But he rejects it as being as impossible as the other tasks.This just broke my heart. Even though I was not a big fan of Naji, I recognize that we all have different tastes, and I wanted Ananna to have her heart's desire. Although it left me sad, this ended up being my favorite part of the book. If you're reading this, I assume you've read the book. What did you think about this part?

Other Opinions-for the most part, my friends LOVED this book but I did manage to dig up some less positive reviews just to give you the opposing view.