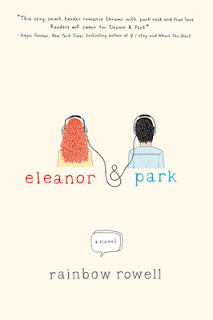 It is still blowing my mind that this is technically a historical fiction novel since it is set in 1986 (I wasn't even alive then!) But that is mostly because I am struggling to put down in words just how much I loved this book.

On the surface, not much happens. Eleanor meets Park under less than auspicious circumstances: she's a new student on the bus and doesn't have a seat. He begrudgingly moves over. Soon they're bonding over comics and music and falling in love. But Eleanor's home life is a mess and the course of true love never did run smooth.

Just as Eleanor and Park are not immediately friends, this book and I did not immediately click. I was just very skeptical despite having seen several glowing reviews. But both Park and I were soon won over by Eleanor-her frankness, her kindness, her commitment to being herself. Soon we the reader get more insight into Eleanor's crappy home (her divorced mother married an abusive alcoholic man and Eleanor was estranged from them for a year after upsetting the husband; she also has four younger siblings making for a chaotic house. Meanwhile her father is incredibly selfish and thoughtless.) Park seems to have the perfect life with two parents who are still madly in love and a younger brother but deals with his own burdens: a father who doesn't think he's masculine enough and racism as he is half-Korean and looks it.

There's a lot of ground to cover and I thought Rowell handled the pacing well. The narration alternates between Park and Eleanor, which allowed me to bond with each of them as I journeyed through their story.  I was particularly interested in the music described and I bet this book would be a kick for anyone who was a teenager then, bringing back some fond memories.

The parts that I thought were exceptionally well-done were the descriptions of the physical interactions between Eleanor and Park. I've read a good amount of romance and other adult books as well as pretty extensively in the YA category and no book in recent memory has done such a good job of evoking the feelings and sensations of first love/young love. Just holding hands sends the pair waxing rhapsodic and had me frantically flipping the pages for more.

I know I gave this book a perfect 5 and I stand by that rating but my one complaint would be that the ending is a bit ambiguous for my taste. I'm sure some readers really appreciated that since it is realistic and thus fitting for the genre but I like all the little pieces tied up in the bow and one important piece was not as resolved as I wanted although it is leaning in that direction.

As I wrote this, I ended up hugging my nook because it held the e-copy of this book. I can't wait to have an actual hard copy to hold. Highly recommended!

Other Opinions:
Beauty and the Bookshelf
From the TBR Pile
Pure Imagination
Rather Be Reading
The Flyleaf Review