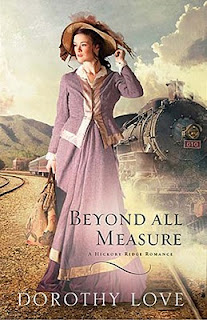 I really loved the cover for this with that lovely purple and the hat. I personally don't like wearing hats but I am interested in seeing other people wearing hats such as the lovely Ada Wentworth, main character in this book, and of course that is appropriate for the time period.

Ada is a destitute Bostonian who takes a position as a companion to the elderly Lillian in Tennessee. Upon her arrival, she is shocked to discover that her job is even more grueling as she will be maid, cook, and nurse to Lillian. She is also surprised by Lillian's handsome nephew Wyatt, lumber mill owner, the smallness of the town despite its flourishing in tough conditions, and the presence of the nascent KKK and its intolerance for black people and Northerners.  She is also haunted with "whys" in regard to her father's mismanagement of money and a broken engagement.

I mostly liked the characters although Lillian has a difficult temperament and there's another character who was very grating and outright mean to Ada. And as a Northern, I have soft feelings for someone who is from the North who is trying to make it in the South, especially in the post-Civil War years.  Wyatt is a good man, who cares for his family and longs for the land of Texas. The clashes between Ada and Wyatt at the start were interesting (Wyatt was kind of a jerk and unable to understand the difficulties of being a poor woman without a male protector).

While I liked the main characters, I thought the KKK aspects and the villagers' bigotry was shoehorned in a bit awkwardly although I appreciate the attempts to include them. I guess I thought they could have been more menacing and I didn't entirely buy that most of the characters we met denounced the KKK. Seriously? But it is Christian romance so I understand why those elements wouldn't be played up enough.

My least favorite part came when Ada's ex-fiance shows up and reveals the secret behind why he broke their engagement. I spent much of the book waiting for him to arrive because he was obviously going to show up and push her toward Wyatt although that whole sequence of events happened even faster than I had anticipated.

Overall: An okay historical romance; the faith elements were lovely though.