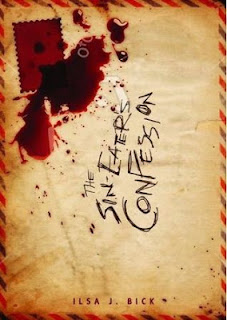 I've read a previous book by Ilsa J. Bick and enjoyed its mix of historical and paranormal elements so I knew her name, which is why I picked up this book. Additionally I was wondering about the title as I've never heard the phrase "sin-eater" before. What does it mean? This reason is explicitly described in the book but you can also read about it on wikipedia.

This book is very different, being roughly contemporary with the main character opening his narration in Afghanistan and leading us through the events that led to his enlisting.  Growing up in small-town Merit, Wisconsin has been mostly good for Ben who seems on track for Ivy League acceptance. However events go awry when Ben is the subject of a sexually charged photo by a younger boy, eliciting a tremendous amount of gossip. Soon after, that young boy is found brutally beaten to death (reminding me of Lauren Myracle's excellent Shine) and Ben struggles with the aftermath. I don't want to go to much in detail in case I spoil anything for you.

The two big elements here, I feel, are the character of Ben and the small-town atmosphere. I have mixed feelings about Ben. He has a lot of anger and he makes some very bad decisions that were hard for me to support. He also really likes talking, not always with a purpose and I got bored some times. As for the setting...honestly it was hard for me to picture the whispers and bigotry on display (compounded by the conservative religion of the photographer's family). I've been lucky to live in pretty open places for my adult life and I can't imagine the claustrophobia and limited decisions imposed on the young people here.

Overall: Not entirely my cup of tea but full of ambiguity and lots to think about.

Other Opinions:
Annette's Book Spot
In Bed With Books