ARC Review: The Madness Underneath 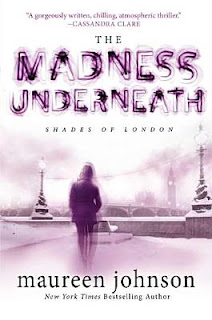 The Madness Underneath by Maureen Johnson
4/5 stars
G.P. Putnam's Sons, 2013
290 pages
YA Thriller Supernatural
Book 2 in the Shades of London
Scheduled to release February 26

*Spoilers for book one*

After adoring first book The Name of the Star, I was chomping at the bit for this sequel and am so pleased to be providing an early review. I was mostly satisfied with the novel but had some big problems with the ending which will be discussed at the very bottom under the spoiler heading.

If you liked the snarky opinionated personality of Rory in book one, I am happy to report that she is back. Despite almost dying in the first book, Rory is too tough to be kept down although she is struggling with the discovery that ghosts exist and she can see them as well as recovering from her attack. She is recuperating in the countryside with her parents but craving the chance to know more about her powers. Somehow she returns to school but mostly ignores schoolwork in favor of spending more time with Stephen, Callum, and Boo.

However despite the strong narrative voice, this book kind of suffers from second book syndrome although I thought of it more in terms of films. You know how Pirates of the Caribbean was an excellent (and profitable) movie so they decided to make sequels? Then the second film set up a lot of stuff but it didn't pay off until the third? Yeah, that's kind of what happened here. Some things do happen but I feel like the third book is where things are really going to happen especially in regards to the spoiler below.

Thinking back over the book, I am remembering a few plot elements but mostly I get the feeling of waiting for something big. I appreciated that The Name of the Star was almost a standalone and loved the mystery revolving around Jack the Ripper. This book's plot is much less strong in my opinion although as I said, I do believe it will pay off in the third book, which of course I am eagerly anticipating! (Despite it not being currently listed on goodreads!)

What the heck? Where is Stephen? Rory better find him is all I can say.