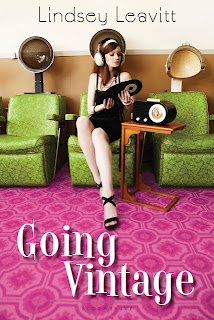 Lindsey Leavitt is definitely one of my favorite authors-she writes such funny and moving stories, usually with a strong focus on family, something I really appreciate. She's primarily written in the contemporary genre so I was surprised and interested to see that it looked like she was tackling historical with this, her latest release. Except I misunderstood the blurb-this book is very much set in the here and now albeit with homages to the past.

When Mallory discovers her cute boyfriend Jeremy has been cheating on her with some girl online, she reacts very strongly to put it mildly. Beyond dumping him, she decides to behave as if she lived in 1962 and plans to imitate the list her then teenage grandmother made. This includes forming a pep club, sewing a dress, and doing something dangerous. As Mallory drags others into her new obsession, her life becomes increasingly complicated and she starts to doubt her plan.

Remember how I said Leavitt writes good family stories? Well, this one is no exception. Mallory has a younger sister named Ginnie who is an excellent character as well as bickering parents (on the verge of divorce?) and the aforementioned grandmother whose high school years were perhaps not as idyllic as Mallory thinks. I cannot emphasize how much I liked Ginnie-she clearly thinks Mallory has gone a bit overboard but she is mostly enthusiastic in supporting her sister and reaps some great benefits as a result.

There were unfortunately some things I really didn't like though. The first one is probably just because I'm a bit older than Mallory and have survived my teenage years as well as being interested in history, I could tell her that the past is never as perfect as it seems in pictures and memories. Thank goodness Mallory learns this but I got a bit frustrated with her over the course of the novel because of that. The other problem was the timeline. Everything seemed to happen at warp speed, much faster than I would have expected. It just seemed exceptionally unrealistic to me.

Overall: A fun title from Leavitt-I continue to love her writing!