DNF: Getting Over Mr. Right 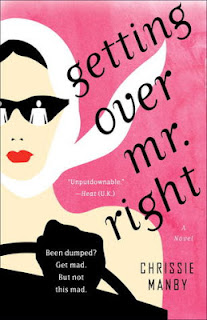 Getting Over Mr. Right by Chrissie Manby
DNF
Bantam Books, 2012
I read 97 out of 288 pages
Fiction "Chick-Lit"

This is going to be a quick review since I only read about 1/3 of the book (plus the last few pages to see if it got better-it didn't.) I was excited to read a book which seemed to promise a woman getting dumped and then getting mad, presumably taking revenge on the jerky ex-boyfriend. And at first events seemed to be happening apace with the dumping happening and the struggling to understand. The writing was snappy enough and was reminding me somewhat of Sophie Kinsella (both being British after all).

But Ashleigh could not let go. She went to his place of business trying to win him back, she yelled at him, she stalked him and his new girlfriend, she seemed determined to keep them together despite his obvious disinterest,  the good advice of other people in her life and the fact that she was taking time off, thereby threatening her ability to earn a living. I eventually gave up when she spent hundreds of pounds on a psychic hotline trying to find out if she'd get back together with her ex. Her desperation was appalling and what at first seemed to be funny grew depressing-her cartoonish antics revolted me.

BUT all my hope was not lost! I read the last few pages to see if it ended with her having finally banished her loser ex from her life. If it had, I would have persevered to the end. Alas it was not to be. She spends the entire book after this guy and doesn't seem to have learned anything. This might be a good read if you're angry after going through a break-up but it was not an enjoyable read for me at all.