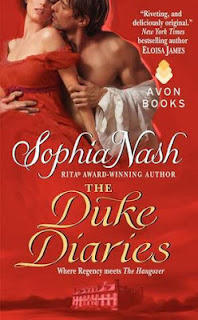 As I mentioned in my review of first book Between the Duke and the Deep Blue Sea (I seemed to have missed book two), these books seem to be much more focused on comedy than on accurately capturing its purported time period. As someone who adores lighthearted stories, this isn't really a problem a for me although it bothered me more here than it did in the first book.

The biggest problem was the ultimate climax and resolution (revolving around the titular diaries) of the story, which I won't share for fear of spoilers. Suffice it to say that I was shaking my head at the utter ludicrousness and I know that I'm very gullible so if even I had difficulty swallowing the scenes, there will definitely be others who scoff at it.

But the plot is not the main reason to read. No, the main reason to read is for delightful characters and their quippy conversations. Our hero and heroine in this story have a history, being neighbors: Rory, Duke of Abshire and Lady Verity, sister to another duke. Their past is very complicated and that creates additional complications on their way to true love and happily ever after.

As I mentioned, this is technically part of a series. I feel like some of the characters I should have known already from book one and I know some of the characters played a role in book two after reading the summaries so it was personally frustrating that my memory was failing me on how exactly they all fit together. I can't believe I'm saying this but maybe there were too many dukes! (How can there be too many dukes? I know but kind of felt that way.)

Overall: A pleasant afternoon diversion-I do recommend reading the series in order if you can just because the characters do pop up in each other's stories but can also be read as a standalone if you want to check out Nash's style in this series.