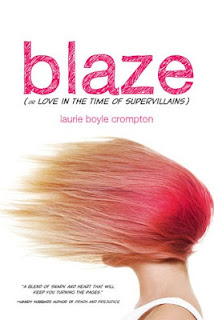 Blaze (Or Love in the Time of Supervillians) by Laurie Boyle Crompton
3.5/5 stars
Sourcebooks Fire, 2013
312 pages
YA Contemporary

When I first started this book, I was a little unsure if it was a straight contemporary or if it had elements of fantasy with the main character perhaps assuming a secret role as superhero. I can confirm that Blaze, our protagonist, loves comic books but she does not in fact transform into any kind of superhero keeping this book grounded entirely in our world.

This is somewhat unfortunate though as our world features a great deal of slut-shaming and bullying as is horrifyingly depicted in this novel after Blaze's crush turns out to be a major player and jerk. I'm not going to share all the events that lead to this discovery but know that it inspires Blaze to draw a comic using his likeness for the villain, which leads to further retaliation on his part. Yes, Blaze makes a lot of stupid decisions but she doesn't deserve any of that behavior. I really liked when Blaze made a connection with another girl who has long been branded as a "slut" but would have liked even more treatment.

I also enjoyed Blaze's love of comic books and her artistic side. She draws her own strips (see below for an example of her drawing) and is very passionate and well-versed on the subject. This comes in handy when she meets a new friend at the comic book store, something that is sorely necessary since her two main friends are awful. I've read a string of books with great female friendships lately so they really stuck in my mind.

But my favorite part of the book would have to be Blaze's younger brother Josh and his friends. Blaze is in charge of driving the group around for soccer practice and occasionally for other events too. Although she complains about this, she secretly mostly doesn't mind and the boys come through for her in a big way at the end.

Family is very important to the story. In addition to Josh, there are Blaze's estranged parents: her mom working long hours while her father left them to pursue an acting career. Neither is a great parent although at least her mom stayed and is trying. Blaze has to take off her rose-colored glasses toward her father, seeing him for what he is now instead of as the cool guy who introduced her to classic comics.

Overall: I liked this book but felt there could have been a bit more meat in some areas as well as a smarter heroine.

Other Opinions:
Books Are Vital
Parajunkee's View
To Read, Or Not to Read

Below is a sketch of Blaze's artwork, provided by Sourcebooks: