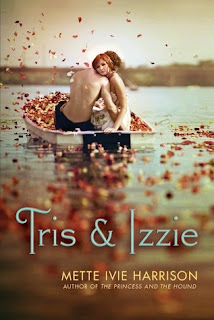 I've never been a big fan of the myth of Tristan and Isolde, which I am familiar with due to the Wagner opera. Drinking the love potion, being married to someone else, death: it never appealed to me although I admired Wagner's music. Still the cover for this was striking if somewhat baffling (Why is he shirtless?) and there was  a lot of buzz.

In the end, I didn't really enjoy it. Izzie is dating popular Mark  but in a misguided attempt to find love for her best friend Brangane, ends up drinking a love potion and falling for new guy Tristan. She also discovers a huge secret about her past and must face an ancient and terrifying enemy.

So while the beginning hews to what I know about T&I, the middle and end take on a life of their own. Sadly I found that beginning immensely unenjoyable. First there is the fact that Brangane is so in love with Mark and her loathing for Izzie was palpable to me if not to her. I hated Brangane and had such a low opinion of her; she did not make a play for Mark so it's not Izzie's fault that they weren't together.  Not that Izzie was a great character; she's kind of mean to outsiders and I didn't think she was very smart. Then there is the fact that the two pairings end up being so sure that they belong together and will be so forever. I'm so tired of YA couples who are sure they found their soulmate in high school especially when they're so immature as these characters were.

The middle/end picked up as Izzie had to confront her destiny, which was fighting a serpent who killed her father and has been terrorizing her hometown almost her whole life. This was more interesting but what wouldn't be after the dull high school drama of the first part? Additionally I wasn't very impressed by the characters and I thought the characterization was poor.

So to sum up: Aggravating characters, unbelievable plot twists, and unexciting writing.