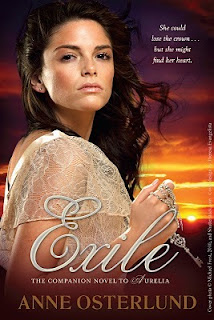 Summary: In this companion to Aurelia, Aurelia has managed to escape the palace walls with her life and has embarked on a tour of her country accompanied by the ever loyal Robert and a guard. As she begins exploring though, she discovers deep miscarriages of justice, extreme poverty and violence, and fears about her future and the future of her country.

This is the sequel to Aurelia, a book I mostly enjoyed but thought it was lacking something to really make it sing. And at first I thought this book would be the same way. Happily it soon picked up, bringing me deep in to the story and then leaving me hanging. When is the third book coming?!

Anyway back to the story. In Aurelia, I loved Robert and his growing feelings for Aurelia as he fought to protect her from the many threats on her life that she suffered due to her position as the Crown Princess, presumed heir to the throne. But Aurelia herself didn't interest me. She did though in this book. Her compassion for her people as she travels in exile without pomp and circumstance drew my admiration. And the descriptions of her beauty, strength, and how she seems to glow with an inner light gave me additional reasons to like her. As Aurelia's character became more defined and vibrant, I was drawn into the story more!

Then there is the romance, of which I am a BIG fan! I loved Aerin and Dane in this author's Academy 7 and was similarly enthralled with Aurelia and Robert in this book.  It's not instant; it's deeper based on getting to know each other. And while each thinks the other is attractive, they are also drawn to the inner qualities such as his knowledge and how he can follow through on difficult decisions and her desire for justice for all of her people. They have many obstacles to overcome (different classes and the continued threats on her life) but I'm rooting so hard for them!

The plot itself is something that had the potential to go very astray for me. It's about Aurelia and Robert journeying through her lands. That can be so boring: arrive at place, have adventure, leave, repeat. But that did not happen here as the adventures varied so greatly and added to the suspense over Aurelia's precise situation. Of course I do enjoy court intrigue, which isn't much in play here because they are away but does reemerge later in the book.

Overall: A slow beginning almost lost me but it soon picked up and the ending has me begging for the third book to arrive...like yesterday! WANT NOW!

Cover: That girl is really pretty although she's supposed to be darker-skinned.