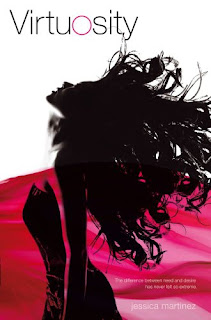 I was really excited about this because I play viola but haven't read many books where characters play instruments, let alone ones where that is the focus. Carmen is the main character here and she's a brilliant violinist who is preparing for the most important competition of her life so far. If she wins, she'll get to borrow a gorgeous violin, earn significant prize money, and perform around the world. But to win, she'll have to power through her stage fright, her reliance on pills, her stage mother, and face down the competition in the form of hot Jeremy.

I really liked parts of this book. Carmen's performance anxiety was wonderfully described as were her performances. When the music clicked and flowed through her, I felt so happy for her and elated for the audience that got to listen to her.  I also loved her struggle with taking pills for stage fright-both whether it was morally right and then through her decision to stop taking them, although I think she should have struggled more as she was dangerously dependent on them.

But my very favorite part was Carmen's conflict with her mother, a soprano whose voice was destroyed and now has all of her hopes and dreams pinned on Carmen's success-what pressure! Her mother micromanages everything about Carmen, going so far as to commit an unthinkable act that is the final push for Carmen to uproot her entire life.  As a former teenage girl, I know that the relationship with your mom during that time with can be difficult; but their relationship had even more difficulties than most. There were some painful scenes as Carmen rebels and tries to think for herself while her mother becomes ever more controlling.

There was something that blindsided me though. Based on my skimming in the blogosphere, I thought it was mostly about Carmen's interaction with violin and performance but there is actually a significant component involving a romance with a male competitor. This can be seen from the actual synopsis which I didn't read. The synopsis asks: "But what if Jeremy isn't just hot...what if Jeremy is better?" And as someone who has read this book, I say that Jeremy is not better. I didn't think much of him and his character for the most part is not good for Carmen. I thought he was scummy and her innocence allowed her to fall for him. A more experienced girl would have past him by and not wasted any time with him.

Overall: Some unique subject matter for YA with decent writing in this debut marred by a lame love interest who comes to dominate the pages.