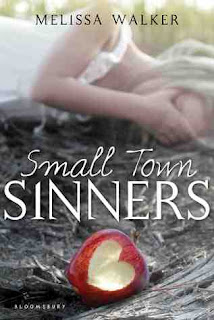 This was the last book in the original Contemps Challenge (check back later today for my wrap-up of all the books) so I was excited to dive in. I was also intrigued by the presence of religion, something so important in my life but something that doesn't usually appear in many YA books and by the plot element of "hell houses," something I find *so* creepy.  But first a brief summary.

Lacey lives in a small town as an only child of conservative Christian parents.  Church is a big part of her life and she's thrilled that she's finally old enough to a. drive and b. take an acting role in their annual Hell House, performed around Halloween time to scare youth into Christianity. Her dream role would be Abortion Girl, whose regrets about her abortion have proved very effective in past hell houses.  But while she thought this year would be great, there are obstacles.

One of her best friends' older sister is pregnant and is shuffled off to a home while her boyfriend/the father continues his usual life. Her other best friend might be gay, not that he could ever share that with their church and is being bullied by a mean-spirited guy. Her parents no longer seem so infallible with all of the answers. And a former classmate named Ty returns to town with a shaken faith and encourages Lacey to question her own.

I really appreciated Lacey's questioning of her church, mostly because it's much more conservative than me. In particular, they are gay-hating, "slut-shaming," and male-elevating.  I also think it's just a great idea in general to question what you think you believe especially during those crucial years as a teenager. However Ty, her main encourager, really annoyed me. I felt like he was leading her to have the same doubts as he did despite her very different experiences.  There were some good things about him; for example he seemed much more open-minded than many of the other characters in the book. But something about him grated on me.

Additionally while she was questioning, she was also lying to her parents and sneaking out of the house, which I can't condone.  Did I think her parents were too overprotective? Yes. Did I think they handled Lacey's questions and doubts poorly? Emphatically yes. Does that justify her blatant disrespect for the rules, which it is their responsibility as parents to have and enforce? No! In fact, as YA parents go, these are very close to the top of the heap. They obviously care about their daughter and are involved with her life; they know the names of her friends and about her dream to star as Abortion Girl.

Overall: I liked some of the themes and the writing was easy to read but this will not be a favorite of mine.