Jane Austen Made Me Do It 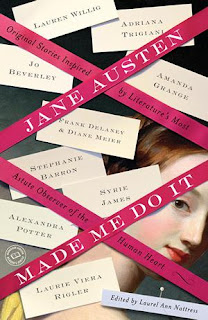 So whenever I read a collection of short stories, I break it down into a LONG review so that I can cover every single one. Like most, this was a grab bag with some stories that really worked for me and others that most decidedly did not. Here goes:

Jane Austen's Nightmare by Syrie James-characters from five of Austen's novels approach her as if they were real people, challenging her portrayals of them. Characters are too perfect, too flawed, and Austen comes to question her own judgment in creating them. Really fun concept and good writing: 4/5

Waiting by Jane Odiwe-Captain Wentworth comes to ask Sir Walter for his blessing on Anne and Wentworth's marriage; also includes flashbacks to their first meeting and engagement. Although I love Persuasion, I didn't find this very exciting so 3.5/5

A Night at Northanger by Lauren Willig-A camera crew for "Ghost Trekkers" is exploring the legend of the ghost at Northanger Abbey; main character Cate discovers her own ghost, that of lady novelist Jane Austen. This was an okay story but it was the last line that really clinched this story for me: 4/5

Jane and the Gentleman Rogue by Stephanie Barron-This read like an excerpt from Barron's mystery series about Jane Austen as a detective and I felt like a ton of characters were thrown at me without the chance to sort them out. They also all seemed to have nicknames and it was just very confusing: 3/5

Faux Jane by F.J. Meier-a The Thin Man-esque story with a married couple and winks to the story investigate someone buying a signed first-edition Pride and Prejudice. An okay story but not one of my favorites: 3/5

Nothing Less Than Fairy-Land by Monica Fairview-A post-Emma story. Emma and Mr. Knightley have gone on their honeymoon but face troubles as they attempt to move Mr. Knightley into Highbury. Mr. Woodhouse is a huge pain as you might expect. But Emma is adorably charming and Mr. Knightley also shines: 4/5

Love and Best Wishes, Aunt Jane by Adriana Trigiani-a letter from Jane Austen to her niece Anna upon the latter's engagement to Declan/Benjamin. This was weird in that the fiance's name changed, he is referred to as both Declan and Benjamin and because there are references to modern technology, which threw me. 2/5

Jane Austen and the Mistletoe Kiss by Jo Beverly-at first I thought this was a post-S&S story as the MC is Elinor; but it is not although it does have some connections to it. Imagine if Colonel Brandon had decided to court Mrs. Dashwood instead of Marianne and that somewhat captures how I viewed the story. Definitely one of the more romantic stories: 4.5/5

When Only a Darcy Will Do by Beth Pattillo-Elizabeth is attempting to earn some desperately needed cash in modern day London by giving tours about Jane Austen's life. One day Mr. Fitzwilliam Darcy shows up and takes her tour, listening to her passion and fears and worries. So sweet; loved the ending! 5/5

Heard of You by Margaret C. Sullivan-a backstory for Persuasion, how Admiral and Mrs. Croft were "matched" by Captain Wentworth; I loved how this filled in the blanks of some lesser-known characters and I felt it was consistent with the original: 4/5

The Ghostwriter by Elizabeth Aston-Sara has lost her love but finds instead the ghost of Jane Austen who provides inspiration and helps her with her love life. I loved the tartness of ghost Miss Austen but I'm not in love with this story: 4/5

Mr. Bennet Meets His Match by Amanda Grange-backstory for P&P; I really enjoyed this look in to how Mr and Mrs. Bennet met and decided to marry. It also features his snobbish parents, her social climbing parents, and the extremely odious parents of Mr. Collins. I appreciated that while Mr. Bennet knew he didn't have a marriage quite like Lizzie and Darcy, he knows that he got laughter and five daughters so in the end, he did pretty well: 4.5/5

Jane Austen, Yeah, Yeah, Yeah! by Janet Mullany-A mashup of two incredibly popular phenomena from the UK: Jane Austen and the Beatles set in 1964. Three teenage girls are obsessed with the Fab Four and one savvy teacher uses that interest to explore Sense and Sensibility. A really clever concept and great for me as I love both; very thought provoking on my opinions of the characters in S&S: 4/5

Letters to Lydia by Maya Slater-I didn't have very high expectations for this one seeing as the title involves Lydia Bennet, one of my least fave characters. Then I realized the narrator was Maria Lucas, someone I always forget about due to her absence from the Keira Knightley film adaptation (oops!) However I soon found myself engaged as we get another perspective on P&P with someone who's right there and can clearly see the love that Darcy and Lizzie have for each other even when they can't tell: 5/5

The Mysterious Closet: A Tale by Myretta Robens-This one was weird. A modern story involving Gothic intrigue and referencing Northanger Abbey. I didn't really like it: 2.5/5

Jane Austen's Cat by Diana Birchall-Jane Austen weaves stories for two of her young relations, taking her classic stories and using cats as the characters. Of course, I'm predisposed to like any story involving cats so this rating might be a bit high: 3.5/5

Me and Mr. Darcy, Again... by Alexandra Potter-I think this is a sequel to Potter's novel, which I read but don't really remember. Em, with the intervention of Mr. Darcy, realizes that real men are better than fictional men 4/5

What Would Austen Do? by Jane Rubino and Caitlen Rubino-Bradway-this story is notable for featuring a young protagonist who just happens to be male. James Austen accidentally enrolls in a class for English Country Dancing and develops a love for Jane Austen that enables him to be himself instead of a mindless follower like the other kids at school. Surprising and sweet-loved it! 5/5

The Riding Habit by Pamela Aidan-a post-P&P story with Darcy attempting to teach Lizzie how to ride but also tackling Georgiana growing up and Lizzie's fears about being inadequate in Darcy's London crowd. Okay-I'm not the biggest fan of what happens next for Darcy and Lizzie: 4/5

The Love Letter by Brenna Aubrey-this story also features a male protagonist in modern-day USA who is inspired by Persuasion. I liked the idea but thought there were some plot inconsistencies that made me like the plot a bit less: 3.5/5

The Chase by Carrie Bebris-this story was so random. It's about Austen's brother Francis William Austen, who was a captain in the navy. I kept thinking we'd see how he inspired Wentworth or something but no. It's just the story of some of his exploits at sea. I thought it was very out of sync with the rest of the stories in the collection: 1.5/5

Intolerable Stupidity by Laurie Viera Rigler-another really clever concept. Writers of Austen sequels and film adaptations are on trial with Judge Lady Catherine de Bourgh presiding and Darcy as the key plaintiff. I think it's very funny to think about such a concept and it reminded me of Jasper Fforde's Thursday Next series. A great end: 5/5

Overall: Mixed but there were some standouts and I mostly enjoyed myself even when I didn't love the story.