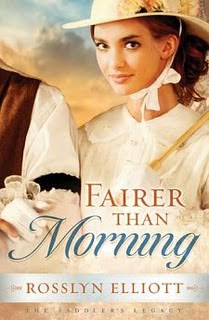 I was very excited to dive into this as it's the first of several Christian historical romances I have on tap for October/November and this one had gotten a lot of positive reviews. Sadly I wasn't as impressed as others although this was mostly due to my expectations.

I thought romance would be the main focus of this book but instead there are a lot of historical details. Ann and Will didn't even spend that much time together; it seemed like they both spent more time with other potential matches and being shaped by their experiences.  However if I hadn't been expecting more romance, I think I could have appreciated this more. Let me back up and start from the beginning though.

At the beginning Ann Miller has lost her mother and must now step in to her shoes to care for her younger sisters while they father alternates between being an itinerant preacher and saddler in Ohio. She receives a proposal from her dream man but her father won't let them marry because she's too young.  Meanwhile Will is orphaned and becomes apprenticed to a saddler in Pittsburgh; although the saddler masquerades as a good man, he soon reveals his true colors, abusing and beating Will through the five years he essentially owns him. Their connection begins when Ann's family receives a barrel with letters from Will's family. The saddler had destroyed them in his display of power but it gets Ann thinking about Will. Eventually the pair meet in Pittsburgh and a lot more happens but I don't want to spoil too much.

As you might be able to tell, there is a lot in this book besides the romance, which I had thought would be the main element. There is anti-slavery rhetoric, insight into the awful conditions of the poor in an industrializing city like Pittsburgh, the twisting of Bible verses to support ill treatment of others (done by slave owners and Will's sadistic master), and a lot of difficulties for Ann and Will to work through both individually and together. And for large portions of the book, Ann and Will seem destined to end up with other people as marriage proposals are tendered and accepted. When they were together, I enjoyed the story much more...but I didn't think they were together enough.

Overall: I wish this had been more of a romance but it was an interesting Christian historical fiction novel so if you don't like a lot of romance, then this could be a good book for you.